Known as the Annual General Meeting (AGM) in Quebec, where Amaya is headquartered, the gathering was a media-free event, perhaps reflecting the company’s uneasiness, pending the results of an investigation into accusations of insider trading for Baazov and other Amaya executives. 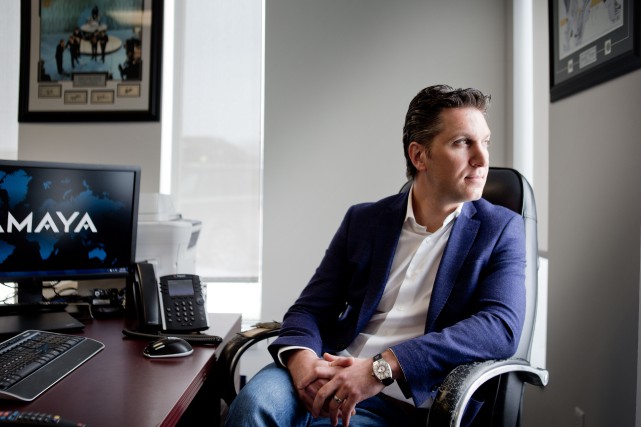 While the Amaya board discussed the company’s future behind closed doors on Tuesday, on-leave CEO David Baazov prepares for his day in Quebec court. (Image: Marco Campanozzi/Archives La Presse)

The charges are linked to potentially suspicious trading activity before Amaya’s $4.9 billion takeover of PokerStars’ parent company, The Rational Group. Although Baazov has denied any wrongdoing, he took a leave of absence from his position at the end of March in the wake of the charges.

Further complicating the issues was the fact that, prior to his legal issues, Baazov and a private consortium were in the process of forming a takeover bid for Amaya said to be worth around CAN$2.8 billion (US$1.55 billion).

The controversial Baazov remains the largest shareholder in the public company at 17 percent, but has been rumored to want to return the business to the private sector with his takeover bid.

But now the vexed executive has been summoned to appear in a Quebec court on September 7, along with two associates and three business entities. Perhaps because of this, the June 28 meeting was closed to non-shareholders as well as any and all media.

“We’re treating it the way we feel is appropriate for shareholders this year,” said Amaya/PokerStars spokesman Eric Hollreiser.

By now it’s well-known that Amaya is considering its options regarding a potential takeover, a fact that was confirmed in an official press release issued after the meeting.

“While there can be no assurance that this process will result in a transaction of any kind, the Special Committee is focused on completing its review of strategic alternatives in a timely manner,” read the release.

The presser also noted that Baazov is among several parties that have entered into confidentiality agreements with Amaya. Moreover, a number of these parties have “received management presentations and are conducting due diligence,” as is a new party that recently entered the takeover talks.

The ramifications of any takeover could be significant for poker players. Amaya is the parent of PokerStars and Full Tilt, which means any major changes at the top could filter down to the felt.

One of the most interesting outcomes from a takeover could be the movement of Amaya from a public company to a private entity. Without the pressure of needing the approval of shareholders, Amaya could be free to implement any changes the board saw fit.

With that in mind, it’s worth remembering that the Rational Group was previously a private company before the Amaya takeover. But before any of this can happen, Amaya will have to decide on the best way forward. Which way that will be is still unclear at this point.