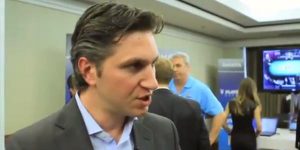 David Baazov is hoping that PokerStars can cash in on the USA market through daily fantasy sports. (Image: Jewish Business News)

PokerStars has returned to the United States, and players from most areas of the country are free to play for real money.

There’s just one catch: you won’t actually be able to play any poker, because the return has come in the form of daily fantasy sports.

Amaya has officially launched StarsDraft, the PokerStars-branded daily fantasy sports (DFS) site that was created through the rebranding of a site formerly known as Victiv.

StartsDraft launched on Friday with a small but standard selection of DFS games to choose from, covering the four major American sports as well as professional golf contests.

For the most part, the new version of the site is identical to what Victiv players were used to, with most of the changes being cosmetic in nature.

However, it’s likely that the site will gain significant traffic thanks to its new branding: the PokerStars brand still carries a fair amount of weight in the United States and elsewhere, and the ability to market to players in the PokerStars database should be enough to create at least an initial surge in traffic.

StarsDraft will need that boost if it wants to be a major player in the DFS market.

DraftKings and FanDuel are in a class of their own when it comes to the level of participation and prizes they can boast, with all other sites, including StarsDraft, lagging well behind.

That task may be made somewhat more difficult by the decision by StarsDraft to withdraw from two major markets: Canada and the state of Michigan.

Players in those areas will still be able to play games and withdraw balances until the end of the year, but new signups and deposits by players in those regions have already been halted.

The decision in Michigan may be related to the report from Gambling Compliance earlier this week that the state’s Gaming Control Board believes that real money daily fantasy games are illegal under state law.

While that doesn’t make the games illegal, that opinion could hold some weight in a future determination of the status of fantasy sports in the state.

None of the other major DFS sites have decided to pull out of Michigan at this time. The states that are most commonly avoided by these companies include Arizona, Iowa, Louisiana, Montana and Washington.

Amaya has been looking to get into DFS market since earlier this year, when executives at the company suggested that there might be a natural overlap between their poker-playing audience (which is largely made up of young, male customers) and those who were interested in daily fantasy games.

But in order to catch up to FanDuel and DraftKings, it will likely take a major marketing push from PokerStars to attract new customers.

In addition, StarsDraft may find it difficult to compete against the kinds of partnerships both of the top-tier sites have made with various sports leagues and franchises.

The difference in the sites can easily be seen by looking at the offerings they have for the first week of the upcoming NFL season. At StarsDraft, the biggest contest for Week 1 is a $10 buy-in contest with a $100,000 prize pool, with the winner taking home $10,000.

Meanwhile, FanDuel is running a $25 entry tournament with $5 million in prizes, including $1 million to the eventual winner.

DraftKings has gone even bigger with their initial offering: for a $20 buy-in, players can compete for $10 million in prizes, with the winner earning $2 million in cash.