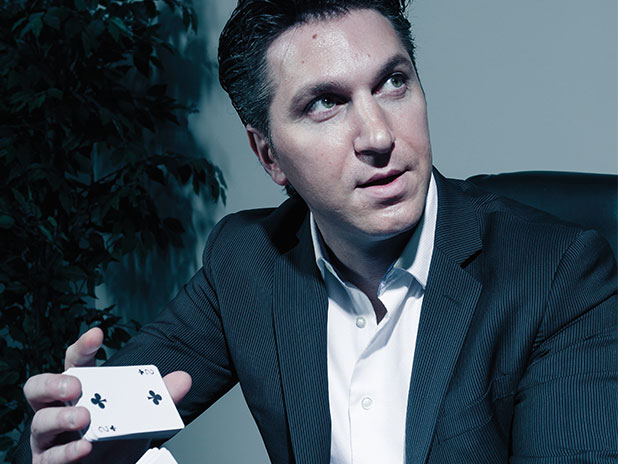 David Baazov, CEO, had to share that Amaya’s Q3 report shows increased profits overall, but that a strong US dollar had forced downgraded 2015 projections. (Image: sharpmagazine.com)

The strengthening US dollar has forced Amaya, the parent company of PokerStars, to reduce its financial projections for 2015.

Following the publication of the online gaming company’s third quarter results, a spokesperson for Amaya stated that, due to the decreased purchasing power of its players, which is owing to the increasing strength of the American dollar, it would be downgrading its figures.

At the midway point of 2015 the company had predicted that its revenue would come in at just under CAD$1.5 billion by the close of the year. However, following slower than predicted growth, Amaya has reduced its projection by 13 percent and now believes revenues will fall between CAD$1.2 billion and $1.3 billion.

In addition to adjusting its revenue estimates, Amaya also reduced its profit projection from a share price of CAD$1.76 to $2 to a slightly less lucrative $1.66 to $1.75.

Despite Amaya’s slightly less positive outlook on the future, news in the present still gave share holders something to smile about.

Another profitable three months of operation saw the company’s revenue hit CAD$325 million , which represents an 8 percent increase on the same period in 2014. Moreover, when adjusted for EBITDA (earnings before interest, taxes, depreciation, and amortization), this figure equates to earnings of CAD$141 million in Q3, which is also an 8 percent improvement on 2014.

In addition to the latest balance sheet looking up, Amaya’s gaming activity has remained high, with more than 2.2 million real money players anteing up on PokerStars during the third quarter of the year.

All of this, according to a statement accompanying Amaya’s Q3 results, is in spite of regulatory and economic issues around the world.

During its tenure as owner of PokerStars, Amaya has had to remove its services from 30 jurisdictions. Moreover, it’s had to adjust the way in which it offers games and services to many more.

This combination of legal issues and the fluctuating US dollar hasn’t prevented Amaya from increasing the size of its business; albeit at a slightly slower rate than anticipated.

In fact, buoyed by the latest set of results, Amaya’s CEO David Baazov believes the company can continue to deliver record results in 2016.

“Despite multiple recent global challenges to our core business, we believe we are well positioned to increase our cash flow and continue to grow our customer base in 2016 through a number of initiatives,” explained Baazov.

Part of the optimism is likely fuelled by PokerStars’ pending entry into New Jersey. Although the company recently hit a stumbling block in the Garden State due to outstanding player refund linked to Full Tilt, its license still stands and many are now predicting a Q1 launch.

If this prediction manifests itself in reality and PokerStars can make an instant impact in New Jersey, it’s likely the company will enjoy enhanced revenues for at least the first six months of 2016.

I would rather have a strong dollar than a weak dollar. Amaya should do just fine here.