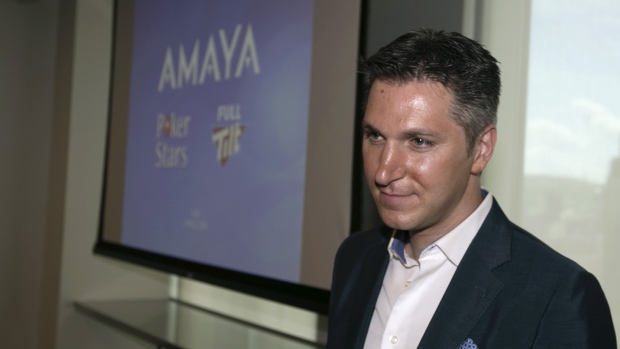 Amaya CEO David Baazov says he is taking an indefinite leave of absence to “to focus on preparing an offer to acquire Amaya.” But has the company’s faith in its CEO been shaken? (Image: cbc.ca)

Amaya top dog David Baazov will take an indefinite leave of absence from his roles as both CEO and chairman, in the light of Quebec regulator AMF’s recent insider trading charges, the company announced today.

Last week, the Autorité des Marchés Financiers, which oversees financial institutions’ practices in the province, announced Baazov was facing five charges related to the leaking of privileged information and attempting to influence the price of Amaya’s securities.

In the wake of that announcement, Amaya vowed that it was fully supportive of its CEO’s position and said it believed the allegations were “without merit.”

But despite previous assurances that the charges would not have “any impact on the management or day-to-day affairs of the operating business,” the company on Tuesday announced the appointment of Rational CEO Rafi Ashkenazi as interim CEO, with Divyesh (Dave) Gadhia as interim chairman, while Baazov takes a “voluntary” sabbatical.

So what, if anything, has changed since last week?

First, it seems that Amaya’s confidence in its CEO’s innocence was based on the findings of an internal investigation conducted on behalf of Amaya by a third-party law firm. This focused on Amaya staff and the trading of the company’s stock immediately prior to the announcement of its $4.9 billion leveraged takeover of the Oldford Group, parent of PokerStars. The investigation found no evidence of violation of securities laws.

Initially, AMF announced charges against Baazov and two other people, both Amaya employees. Those two are Benjamin Ahdoot, Amaya’s VP of government projects, and Yoel Altman, described as a longtime strategic advisor to Baazov, with strong links to Amaya.

But a second announcement by the AMF, and subsequent investigations in the Canadian press, have revealed that the investigation into Baazov goes way beyond the Oldford Group takeover, stretching back five years. It paints a picture of a network of alleged information sharing, not among Amaya employees, but among Baazov and his brother, their associates, and an associate’s immediate family members.

“Subsequent to that announcement,” explained Amaya, “the Board became aware of a decision of the Bureau de Decision et de Revision [Bureau of Decision and Review], the administrative tribunal in Quebec that hears certain AMF applications, which discloses additional AMF investigations into the alleged conduct of Mr. Baazov and others which are beyond the scope of the charges and of the internal investigation referred to in Amaya’s March 23rd announcement.

“While none of these allegations have been proven,” the official company statement added, “the Board takes them seriously and has expanded the mandate of the Special Committee to investigate these additional matters.”

Amaya says Baazov will take his leave in order to focus on his forthcoming offer to take the company private, an offer that Baazov has announced he still intends to make, despite the charges against him.

Amaya said that the Special Committee set up to oversee the bid has “not made a determination as to whether a sale of Amaya is in the best interests of the company at this time.”