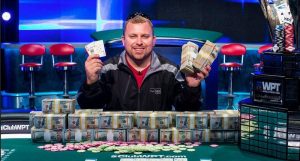 Jason Brin, a carpet salesman and amateur poker player from De Soto, Kansas, has bested a table of sharks to win the first ever WPT Choctaw.

Brin takes his place on the long and illustrious list of carpet selling amateurs who have won major poker events, along with 1999 WSOP Main Event Champion Noel Furlong and … er, possibly one or two other guys.

The $2 million guaranteed, even the at the Choctaw Casino Resort in Durant, Oklahoma, was a roaring success for the organizers, attracting 1,175 entrants and creating a $3,973,725 prize pool.

But the top prize eluded all but the Carpet King.

Moreover, in the process of claiming his $682,975, Brin negotiated a final table that include Darren Elias, who was looking to bag his third WPT title within 12 months, as well as one-time WPT champ Andy Hwang who Brin defeated heads-up for the title.

“Oh boy, where to start?” wrote Brin excitedly on his Facebook page. “Sorry if I haven’t gotten back to you, I think my Facebook crashed … what’s better than the Championship itself is the support from all of you. I melted when the last card landed.

“You will see on the show that the audience started taking a liking to me, they knew I was the underdog to all the professional players. I cracked numerous jokes and one liners to the crowd. By the end of the night they were chanting ‘Rudy, Rudy’ in relation to that movie.

Mowing Down the Field

“I had almost everyone associated with the WPT silently telling me to mow down this field. I blocked out the prize money and played to win, good or bad, and it worked out. We didn’t get done with interviews until about 5am.”

Of course, Brin is no wide-eyed neophyte when it comes to poker.

Over the past few years he has cut his teeth on the Mid-States and Heartland poker tours, finishing in fifth place at last year’s HPT Kansas City Main Event, for $29,847.

Brin has dedicated his victory to his uncle, Loren, who passed away last year and who taught him how to play the game around the kitchen table.