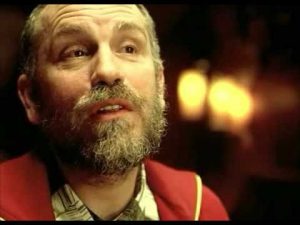 Leonid Gershman could be the real-life Teddy KGB (pictured) if recent allegations prove to be true. (Image: YouTube.com)

A suspected gang member with possible links to the Russian mafia reportedly referred to guns as sex toys when discussing an issue with his high stakes poker game.

Earlier in November a story broke concerning a gang that police believe are associated with the Thieves in Law crime syndicate.

The Eastern European gang is synonymous with the Russian mafia and the men arrested in Brooklyn, New York, are accused of helping to run the organization’s overseas activities.

Following nine arrests by federal agents, a 10-count indictment against the men was made public. Among the list of illicit activities was a high stakes poker ring.

Taking place in a building on Coney Island Avenue dressed up to look like an auto leasing shop, the Brooklyn games would see players play for stakes in excess of $150,000.

On top of running an illegal poker game, the gang is also accused of crimes involving racketeering, extortion and drug trafficking. One of those arrested, Leonid Gershman, has since been accused of being the link between the Brooklyn gang and the Russian mafia.

In a court hearing on Friday, audio tapes of Gershman revealed he may have been trying to hide his stash of guns from the police. In one conversation to his girlfriend, Lorena, he was heard directing her to the place where he keeps his “toy.”

In another conversation, Gershman tells an associate that he wanted a “toy” by “Sunday” so that he could deal with a poker player who’d been cheating in his game.

Although it’s not known why Gershman believed the man was cheating or whether he exacted any punishment on him, the judge believes that the “toy” in question was a gun.

Denying the allegation, Gershman’s lawyer, Michael Fineman, explained that the toys referenced were of an “intimate” nature. When asked by reporters outside of court whether or not her boyfriend was referring to her sex toys, Lorena declined to comment.

Given the serious nature of the indictments against Gershman and the apparent evidence that he was willing to shoot a poker player caught cheating in one of his illegal games, a federal prosecutor believes he shouldn’t be granted bail.

Although the matter is now in the hands of Magistrate Judge Ramon Reyes, it seems as though Gershman isn’t someone who took losing lightly.

In fact, were it not for the seriousness of the situation, Gershman could easily be confused with the legendary Rounders villain, Teddy KGB.

Man, the poker world sure has its fair share of unsavory characters.