Not even a fake name and a big-ass hoodie could stop players from taking a sniff and smelling something funny at the Beau Rivage Casino’s Million Dollar Heater, and they were right. The man who said his name was “Mike Lawrence” was really accused livestream cheater Mike Postle, who churned to the surface of a final table in Mississippi this past weekend. 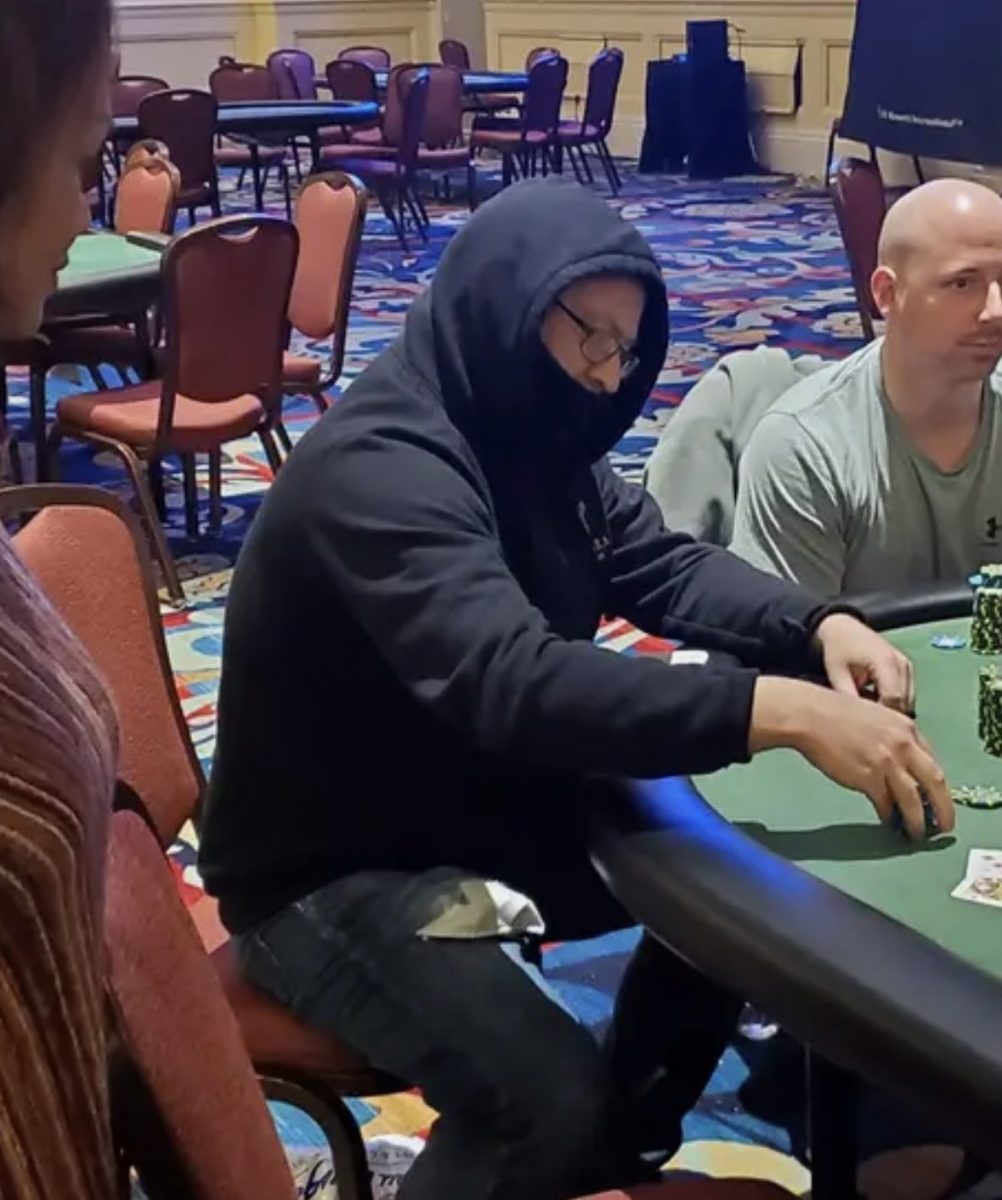 Mike Postle popped up at a tourney in Mississippi. The player is accused of cheating on a livestream in 2018-19. (Image: @Mawkswell Twitter)

Postle washed out in seventh place, which was still good for $32K, but he was going for $208K in the $1,200 main event. It was the first time Postle cashed in a tourney in three-and-a-half years, according to the Hendon Mob. He has more than $571K in tournament winnings.

Postle’s infamy is his own doing.

Postle was accused and sued for allegedly cheating during a year-plus while appearing on the Stone Gambling Hall live stream where he took about $250K from players playing mostly small-stakes poker. Players began calling his eccentric successful play God-like, but Veronica Brill, the stream’s co-host, wasn’t so sure.

Brill took her suspicions public in September 2021 after analyzing hours of play, and the story went viral. Postle kept playing on the stream, and many of the popular players and vloggers, including Daniel Negreanu and Joey Ingram, put their eyes on his play and agreed with Brill — something was up.

Or more likely, down.

Brill and others suspected that Postle used a cell phone sitting in his lap and an unknown confederate to read the RDIF information stored on the playing cards to know what his opponent’s were holding in the 69 sessions he played on the stream. It sort of mirrors the recent Hustler Casino Live accusations that were cleared by independent investigators.

Postle made so many straight-up weird and outlandish plays during the streams — like calling re-raises with T2, etc. — that many players sat up and took notice, especially when they were edited together by various YouTubers.

Poker fans weren’t the only ones who noticed. Major media outlets from ESPN to Wired reported on it, and Postle’s life would never be the same.

Not charged and back to rounding

Although a judge dismissed a case brought against him and the owners of Stone’s Gambling Hall by accusers Brill and more than 80 others who say they were ripped off by Postle, he still carries the stink of a cheater because of how publicly it all played out.

Postle sued accusers Brill, Negreanu, ESPN and others for $300 million in defamation in 2020, but she counter-sued and won $27K in an anti-SLAAP-judgement. Brill also claimed in 2021 that Postle owed her thousands in attorney fees. Postle dropped the defamation suit in 2021.

Postle apparently still owes her the money, as Brill confirmed through today’s retweet that claims his cash was being held by Beau Rivage after the casino was contacted by Brill’s attorneys. CardsChat couldn’t confirm this.

Update: The money was never held.

Lean on your friends
Lien on your enemies https://t.co/8o59h55kmk

Poker consumer activist Todd Witteles was named in Postle’s defamation suit, and also says he is owed money from the accused cheater via his own anti-SLAAP suit.

For those who forgot, I didn't comment on Postle until a week after the story was already huge, and my coverage of it had no impact on his rep. He sued me anyway. We offered to not go after fees if he immediately dropped me from the case, and he refused.

The fact that @MikePostle is at a final table and trying to dodge his attorneys fees that are owed to @Angry_Polak and @ToddWitteles is sickening. #PayThem

I woke up with a message from @Mawkswell

This is getting weirder by the minute.

Apparently they allowed Postle to use an alias and are reporting his information as "Mike Lawrence". pic.twitter.com/LX3bcco0eP

Also the defenses of Postle in that thread are mind blowing.

News flash – if you have debts you’ve been ordered to pay, and you publicly win a lot of money, I’m sure the lawyers are gonna come calling.

And here’s Postle getting knocked out of the tournament, with a slight needle.

Bye Mike… you should have used your super powers to know you were up against top set…. Must only work at Stones Live. https://t.co/csJPYU5hnF pic.twitter.com/GJZ9lKGD48

Postle has maintained he did not cheat on the Stone Gambling Hall stream and, to reiterate, no charges have been filed against him or anyone else. While livestreams have become a popular way to promote cardrooms across the country, Stone Gambling Hall doesn’t broadcast one anymore.