Alex Foxen greatly benefited from the unlimited re-entry format in the $10,400 buy-in WPT Five Diamond World Poker Classic at Bellagio. On his fifth bullet — or maybe it was his sixth, depending who you ask — he won the prestigious tournament for $1,694,995 after dominating a tough final table. 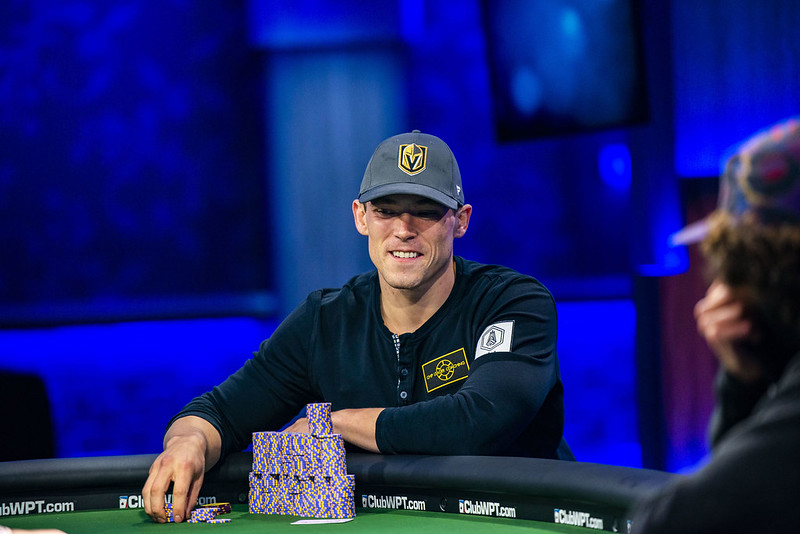 Alex Foxen has a bankroll larger than his biceps. (Image: wpt.com)

Foxen beat out a tournament record 1,035 entries, a handful of which were his own. By shipping his first WPT title, he also secured the GPI Player of the Year title for the second straight year.

Some social media critics weren’t too enthusiastic about the manner in which Foxen won the WPT Five Diamond event, however.

Foxen Was Just Playing By the Rules

Norman Chad was among those expressing disappointment in the path Foxen took toward his first WPT title. Chad wasn’t critical of the high-roller’s play, however. Instead, the ESPN poker commentator drew issue with the tournament’s structure, which gives well-bankrolled players an advantage over other competitors.

I have nothing against Alex Foxen – in fact, I once beat him in a best-of-nine arm wrestling event – but I am supposed to celebrate the fact that, after running out of chips FIVE TIMES in the prestigious #WPT5D, he finally built a stack the 6th time en route to winning the title?

It should be noted that Chad has never, and will never, defeat Foxen in an arm wrestling competition. Foxen is a former college football athlete and Norman Chad is … Norman Chad. The long-time poker broadcaster, however, does bring up some valid points about unlimited re-entry.

He isn’t the only one who dislikes tournaments, such as the WPT Five Diamond, allowing unlimited re-entry. Some commenters on Twitter referred to the format as a “joke,” while another individual (@JoeyGemelli) encouraged Chad to “do what you can to be the change.”

It should be noted, however, that Foxen did nothing illegal be rebuying so many times. He didn’t cheat the game — he simply played by the house rules. Some poker players dislike the unlimited re-entry format as it gives high-rollers, such as Foxen, an edge. The bigger your bankroll, the more chances you’ll have at building up a stack and running deep.

Foxen nearly won the WPT Five Diamond two years ago, but fell just short after losing heads-up to Ryan Tosoc for the title. So, when he entered Saturday’s final table at Bellagio, he had some unfinished business to take care of.

Say what you want about unlimited re-entry, but he earned that victory at the final table. Foxen’s opponents included two past WPT champions – Jonathan Jaffe and high-roller superstar, Seth Davies.

Foxen entered the final table second in chips behind Danny Park. Jaffe, who started the day third in chips, was first to get felted on Saturday. He took home $355,125, and now has more than $1.7 million in career World Poker Tour cashes.

Park was next to go despite beginning the day with the chip lead. He lost a race with pocket 10’s against Toby Joyce’s ace-queen in a massive pot when a queen landed on the river. The fifth-place finisher earned $465,780.

Foxen had already secured GPI Player of the Year honors when heads-up play began. He added the exclamation point on his impressive year by quickly finishing off his opponent to take down his first WPT title for $1,694,995, a $1,642,995 profit after factoring in his five buy-ins. Joyce received $1,120,040 as a consolation prize.

According to Matt Savage, four of the six players at the final table were on their first bullet. Foxen, entered five times, and one other player – whose name wasn’t disclosed – bought in twice.