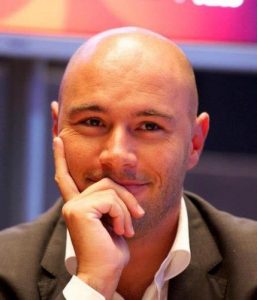 Alex Dreyfus has a few things to say about the future of poker. (Image: Twitter)

Alex Dreyfus, the creator of the Global Poker Index, was none too pleased with a recent Cards Chat article that questioned the potential of the new Global Poker League.

Dreyfus is set to introduce the GPL this coming February.

The GPL is an innovative league that will sort of turn poker into a sport. 12 teams, players to be chosen at a later date, will compete in a stadium setting over the course of 14 weeks.

Players will earn salaries instead of money from each match, and each team will have an owner, just like in professional sports.

The purpose of the league is to advance the game of poker so as to avoid a continued decline in popularity. The new concept is appealing to many, including top poker players, according to Dreyfus.

However, a recent CardsChat.com article questioned the legality of the league, to which Dreyfus disagreed.

“This is legal, period.” Dreyfus said. “If you want to have the legal opinions (from a lawyer), I’ll send it to you.”

Dreyfus suggests his league isn’t a form of gambling because, as he explains, there are 3 elements of gambling:  consideration, game of chance, and a prize.

In order for the game to be considered legal, just one of the elements must be removed.

The GPL, according to Dreyfus, is more like a freeroll because the players don’t wager anything. Thus, making it a legal game.

Assuming Dreyfus has no issues with the United States Government, the Global Poker League faces the tough task of getting enough viewers to make the league a success.

Dreyfus is confident he can make it happen and, if nothing else, is willing to give it a try. When asked about market research results he’s received, Dreyfus shared positive results from a consumer survey.

“Based on the results from an independent leading company (Repucom.com), 51% of US poker fans said they would like to watch GPL.”

When asked if he thinks casual poker and sports fans in America will buy into his league, he offered a realistic, yet optimistic response.

“Is Donald Trump going to win (US presidential election)?” he asked. “We don’t know, based on survey. Is GPL going to work? Nobody knows.”

Dreyfus states that the players at the top of the GPI are behind the ranking system and the GPL.

“I can give you dozens of names of top players that will publicly support what we do, including in America.”

What about those that don’t like him, the GPI, and/or the GPL idea?

“Players that don’t like it are those that are not at the top (of the GPI rankings). Classic. Ask the top players.”

Dreyfus is also aware he has plenty of haters but doesn’t appear to let it phase him.

“Yeah, that’s life, can’t be loved by everybody.” He said. “Ask the top players, which are the only ones I’m focusing on. The GPI players.”

Instead of concerning himself with those that don’t like him, he is focused on making the Global Poker League a rousing success.

“I just want you to know the big players are behind GPL.”

It is uncertain if the top poker pros he is speaking about will compete in the GPL.

However, he did offer up some information about what fans can expect from the league in February.

Dreyfus said teams will be able to draft players starting on January 1, and not before. Until then, he is unable to communicate names.

As for expected salaries, Dreyfus said the will be “symbolic and will not be published, it’s private between players and teams.”

Dreyfus is currently on a European tour promoting the GPL at events such as EPT Malta. If the league is to thrive, he’s going to need the backing of the poker world and potentially sports fans. Top European poker events is a good place to start.

Draft me Alex. You can put me on a team. Let me know. I think its a great idea! 🙂

I wonder if players in the GPL will have as much trouble getting paid as the guy did getting his WSOP satellite from them.