This past weekend, 25-year-old Ahmed Taleb, who four years ago traveled from Morocco to the United States to pursue his education, beat out 215 other entrants to win the MSPT Grand Falls Main Event for $54,098. 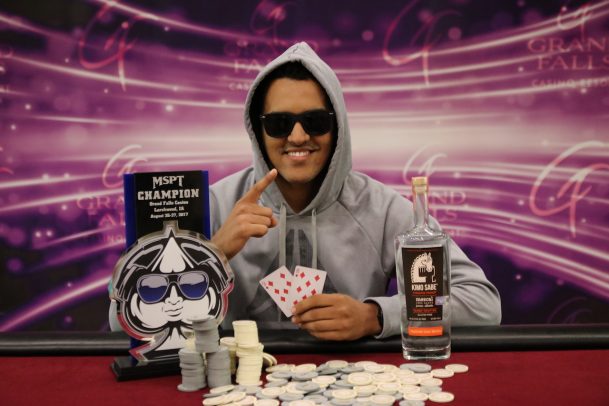 Ahmed Taleb had only cashed for $1,777 in live tournaments before taking down the MSPT Grand Falls Main Event for $54,089. (Image: MSPT)

Taleb, who had just $1,777 in lifetime tournament earnings before the win, was the last player to enter this tournament. He entered the field on Day 1B with just one minute remaining in late registration. It was the first time he’d ever played a major tournament.

“I fired a bullet in the qualifier and didn’t qualify,” he explained. “I was debating should I play, should I not, and then I played $2/$5 no-limit cash and ran really good. I decided to fire a bullet at the last minute.”

When Taleb made it to heads-up, he held 2.7 million in chips to Lucas Christoffer’s 1.6 million. However, the counts soon flipped when Christoffer doubled up with Ace-King against Taleb’s pocket jacks.

Upon turning top pair, Christoffer bet 150,000. Taleb check-raised all-in, and Christoffer called. The 10♦ river was no help, and the tournament was over. Christoffer had to settle for runner-up and a $32,243 consolation prize.

Taleb, who works and studies at a university while playing poker on the side, traveled to the casino just outside Sioux Falls, South Dakota, from his adopted home in Minnesota.

The win comes three months after Travis Gant bested a field of 426 entries to win the MSPT Grand Falls $350 Regional for $29,782.

Perhaps the biggest story at the MSPT Grand Falls final table was professional fisherman Ted Takasaki, who also happened to be the defending champ. In 2016, the Freshwater Fishing Hall of Famer took down the MSPT Grand Falls for $52,360. He was looking to go back to back, but he faced an uphill battle as a short stack.

Season 8 of the MSPT continues in at Minnesota’s Running Aces Casino, which is just north of the Twin Cities, from September 16-24.

Finally a player from my country won a live tournament lol

lol no there are other successful Moroccan poker players. like William Kakon who has $ 995,900 in earnings.