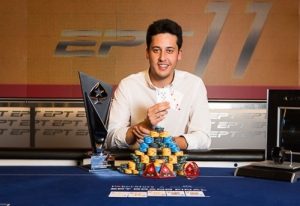 The EPT Grand Final has once again bagged up its chips and headed for the door, with Adrian Mateos emerging as the Main Event winner.

Yes, at long last, the EPT has a Spanish champion. It’s been a statistical quirk that no Spanish player has ever won an EPT Main Event.

Neighboring Portugal, with one fifth of the population of Spain, has had two winners, which must have rankled some Spaniards.

It seems even more unusual when you consider that the EPT Barcelona has been a stop on the tour every single year since day 1, and that the EPT even had a stop in Madrid, once upon a time.

Thanks to Mateos, though, these facts are no longer relevant; this particular jinx has been exorcised. And he did it in some style.

You may remember Mateos as the 19-year-old winner of the 2013 WSOPE in Einghen-les-Bains, France, so the kid has previous wins.

That win also meant that the $1.2 million he picked up in Monte Carlo over the weekend was not even his biggest score to date.

His WSOPE win, at $1.3 million, just edges it, and takes him to second-place on the Spanish all-time money list, behind former World Champion Juan Carlos Mortensen.

Mateos had his work cut out at a final table that included the great Johnny Lodden, and Ole Schemion, EPT Season 10 Player of the Year, no less.

Leading the field, however, were two amateurs, Muhyedine Fares, and Hady El Asma.

Schemion was first to fall from the six-man final table, with Jose Carlos Garcia, known online as “TryToExploit,” hitting the rail soon after. Lodden found himself crippled in a hand after Mateos, after which the latter even showed a cheeky bluff, with J-10 on A-3-9-4-A board, although Lodden seemed close to making a hero call.

The Norwegian was knocked out soon after, followed shortly by the shortstacked El Asmar.

Mateos was facing a 2:1 chip deficit when he squared off against Fares for the title. The crucial hand occurred when Fares raised with A-9 and Mateos called with 7-4 suited, only for the flop to fall A-7-4. A raising war ensued and, four hands later, the tournament was over.

“I’m so proud,” said the first ever Spanish EPT champ. “I want to thank all the people who supported me. A lot of people contacted me on Twitter and Facebook and I want to thank them. I’m really lucky to win the Grand Final.”