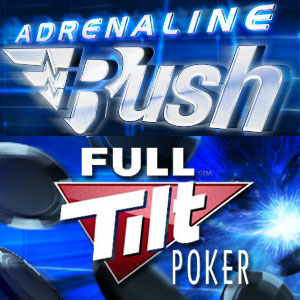 Full Tilt Poker has announced Adrenaline Rush Poker, an even speedier way for players to rake in the cash over the already fast Rush Poker.

One of the biggest advantages that online poker gives to players is the sheer speed of play multi-tabling offers. However, when players go up in stakes and play fewer tables, play can slow down. After all, when thousands or even hundreds of thousands of dollars are on the line, players are going to take their time making what could potentially be a life-changing decision. If anything, the thoughtful tension about what kind of hand will be played next is action enough. By contrast, Full Tilt Poker’s “Rush Poker” variation of the game brought high-speed poker to players everywhere at all stakes, allowing players to get in almost a thousand hands an hour. But Full Tilt decided that Rush Poker could go even faster and, with a recent update, they have introduced Adrenaline Rush Poker.

Adrenaline Rush Poker, much like Rush Poker, is perfect for the players who just don’t have the time required to sit through the flops and rivers of normal poker hands. Those who don’t like making quick, one-and-done decisions need not apply with this variation of poker. It certainly sets the bar for gaining (or losing) money in a timely manner.

Similar to standard Rush Poker, Adrenaline Rush throws players into another table right after they fold their hand. That means a new group of opponents with each new hand. Unlike normal Rush, however, tables aren’t any bigger than 4-handed. Players can buy in for between 5 and 10 Big Blinds but the only actions available are to raise or fold. There is no call, unless your opponent goes all-in!

At the moment, Adrenaline Rush games are No Limit Hold’em Cap games. After the flop, the player can no longer bet. If you decide that the cards you have are worthy of playing, your only choice is to raise when the pre-flop action gets to you. Calling is only an option if your opponent is all-in, the cap of 10 Big Blinds has been reached or you are facing a raise greater than your stack size.

The speed of Adrenaline Rush is definitely an interesting take on the game. Those who love to gamble are in for a ride. Staying in a hand more or less means the player is all-in. And with the pre-flop betting limit, the cards are set in stone until being rushed into the next brand-new table. With tables being 4-handed, there’s even less of a chance of holding out for that perfect hand.

If the announcement of Adrenaline Rush Poker isn’t enough enticement to warm up your bankroll, Full Tilt also revealed that casino games are being brought into the fold. Games like blackjack and roulette are being rolled out into a few markets. Currently these games can only be played for play money during the testing period, but a real money option will be available after the end of testing. Real money games will also mark the expansion into additional tests markets. The inclusion of these casino games marks the first time Full Tilt’s parent company, Rational Group, have added non-poker games to their lineup. As of yet, there are no plans to put non-poker games on PokerStars, Full Tilt’s sister site.