They’re lucky no one got hurt. 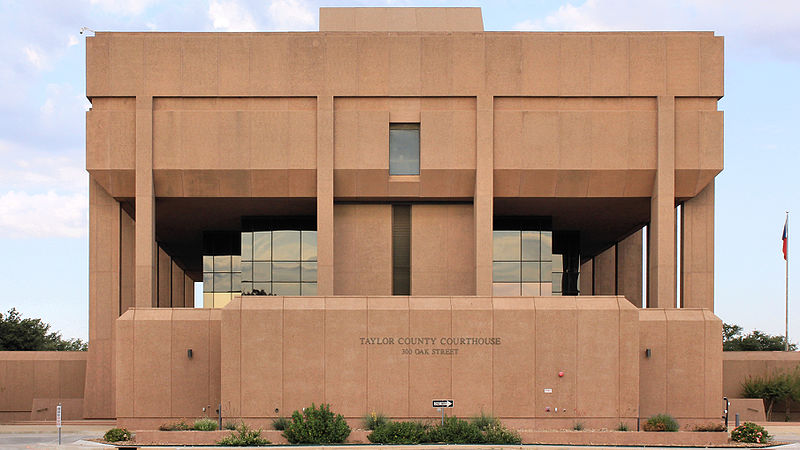 Four men who allegedly robbed a poker game at gunpoint in Abilene, Texas, await justice at the Taylor County Courthouse, a building that doesn’t appear to be messing around. (Image: Larry D. Moore)

A grand jury in Taylor County, Texas, indicted four men from Abilene Thursday on charges related to armed robbery of a local poker game in October. The accused poker robbers have not yet entered formal pleas, but according to the Abilene Reporter-News, all of the men admitted to their crimes.

According to other players in the game, Douglas Sims, 45, showed up to a local poker game he frequented on Oct. 4 last year and was “acting erratic” throughout his short session.

Investigators claim he cashed out early that day, and 30 minutes later, his son, Jamar Sims, and two others, Michael Payne and Chazsman Small, entered the card room, pulled out a gun and demanded money.

Not Quite Ocean’s Eleven

The trio walked away with approximately $8,000 worth of stolen cash, watches, phones, jewelry, and other personal items. But, the crooks left behind a trail of evidence, and were apprehended and sent to jail within days.

One of the robbery victims recognized the younger Sims, which made it easy for police to connect the dots. As if that evidence wasn’t enough to make an arrest, Douglas Sims, apparently, had been acting suspicious leading up to and on the day of the robbery.

Another player told police Sims was saying prior to the robbery that he was frustrated with how “DJ” had been treating him. The accused crook allegedly said that if DJ didn’t start showing him more respect he was going to “shut down the place.”

According to court documents, video surveillance shows Douglas Sims send a text message moments after investigating the cash drawer on the day of the robbery. Shortly after, he left the card room and, 30 minutes later, the place got robbed.

On Thursday, a Taylor County grand jury indicted the four suspects on multiple charges. Payne, Small, and Jamar Sims were each charged with one count of aggravated robbery and one count of robbery.

The elder Sims faces the same charges and was also indicted for possession of a firearm by a felon.

According to the prosecutor’s charges, the defendants where shown surveillance video of the robbery, at which point all four individuals involved realized they were drawing dead and admitted to the crime.

Public records indicate Douglas Sims has a criminal history that includes a 2013 felony conviction for possession of cocaine, and thus can’t legally own a firearm, even in Texas. Two weeks after the poker game heist, police found him in possession of a .22 caliber rifle.

If you spit in the air it will hit you in the face.
We live in a cold cold world.
Why they don’t learned to play poker if they wanted to get cash? 😛

Only 10-15 % can make profit in poker. And I’m very doubt that this robber Douglas and his accomplices are good players! Evidently he put too much money into the game and wanted to get it back.

No one got hurt physically that’s good. $180k in bond for an $8k score they didn’t get away with, they pulled off a micro turbo sit n go compared to a wsop tournament. In their case shameful, crime doesn’t pay. “Crime Family”, I guess, lmao…

De Niro in “Heat” – “Neil: You see me doin’ thrill-seeker liquor store holdups with a “Born to Lose” tattoo on my chest?”