Another person who thought they could get one past a casino was arrested recently for allegedly switching cards during a Pai Gow poker session at several different facilities in the Washington State area.

The man, who is an aerospace worker, was arrested at his work place and now could face a possible 13 counts of second-degree cheating and five counts of thefts, all misdemeanors, according to a story in Everett’s Daily Herald. 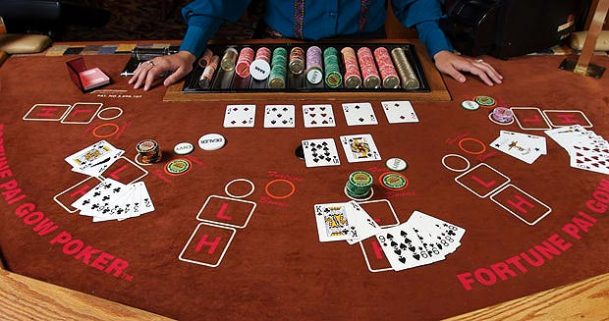 A Washington State man was arrested on misdemeanor charges that he cheated several area casinos out of nearly $7,000 at Pai Gow Poker. (Image: Sportsbettingacumen.com)

The alleged crimes took place at five different locations and special agents used high-resolution surveillance cameras to gather evidence, which netted him nearly $7,000, according to the state gambling commission.

What the cameras reportedly picked up was the 43-year-old man, who has yet to be publicly identified, betting on several hands at once, complicating the game play and allowing him to switch cards more easily.

He went to different casinos from March to September 2016 to conduct his ruse, officials claim.

“This gave him an unfair advantage over the card rooms,” Special Agent Danny Lisa wrote in a report.

A dealer became suspicious of his activities, and the player told her in Vietnamese: “Don’t say anything.”

He was seen on surveillance switching cards while a dealer adjusted her chip tray. He was also accused of cheating at an unnamed Las Vegas casino last year.

A picture of the man was circulated to different gambling houses with a warning soon after the incidents.

What is Pai Gow?

The game of Pai Gow poker is a variation of the Chinese domino game Pai Gow and was invented by Sam Torosian in 1985 at his casino in Southern California.

In this version, 52 cards and a joker are utilized. Every player plays against the same dealer hand, separating his seven cards into a five-card high hand, and two-card low hand. The high hand must be of higher poker value than the low hand.

Some of the ways players cheat at the game include marking cards, playing with partners, or cheating with the dealer.

Editor’s Note: In our original story, we had indicated that the unnamed aerospace engineer had been charged, which is incorrect. We regret the error and the story has been updated to reflect merely the possibility of charges being filed.