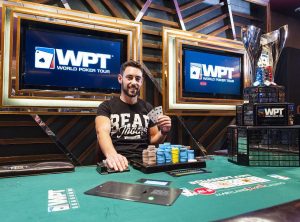 Aaron Mermelstein made it two WPTs in a year with his win in Maryland. He has now won almost $1 million in WPT cashes. (Image: World Poker Tour)

Aaron Mermelstein took down the inaugural WPT Maryland Live! Stop this week to add a cool $250,000 to his career earnings.

For his troubles, the American pro also bagged a seat in next year’s WPT World Championship worth $15,000.

He now boasts over $1.2 million in live cashes.

337 runners turned out at the Maryland Live! Casino in Hanover this week as the World Poker Tour added yet another new name to its growing roster of host towns.

Maryland is going through a transitional period with regards to poker right now, with legislation being considered that would legalize home games.

Casinos, meanwhile, are thriving, and a booming casino poker scene ensured a good crown in Hanover.

Previous WPT champs like Will Failla, Leo Wolpert, and Jason Koon turned out in force, but it was the name of 2012 WSOP World Champion Greg Merson that lit up the player list.

Merson was in imperious form, making it to the final table as chip leader.

Despite the threat from a world champ, Mermelstein made his chip advantage count, taking just three hours to finish off the opposition.

No jack presented itself, and Holmes was an early faller.

Eights reared their head again some hands later as Cate Hall moved all-in holding K-5. Finding himself up against the eights of Wang this time, he too couldn’t find the overpair and was sent to the rail in fifth place.

It was here that the in-form Mermelstein started to make his aggression tell.

A big hand against Merson where he hit trip queens on an A-K-Q flop was enough to take a commanding lead, and most of the chips.

And the Borgata champ finished off Merson a few hands later when he picked up jacks. Merson’s 10-8 may have made top-pair on a 10-4-3-9 board, but it wasn’t good enough to survive.

Wang in Wrong Place For the Win

With Andrejevic gone in third, it was a straight duel between home-state boy Wang, who was coming off the back of several small cashes at the Aria in Las Vegas.

The Derwood, MD man was already guaranteed a payout to eclipse anything that had come before, and his fate was sealed when he shoved the last of his chips in with A-8.

Mermelstein’s snap-call with pocket sixes proved to be decisive as they held up and gave the deserving player his title.

With the win, Mermelstein’s name was etched onto the WPT Champions Cup. For Wang, his $164,765 payday put him into the top 50 for Maryland players.

The World Poker Tour now moves onto sunny South Africa and an Emperors Palace Poker Classic event which is fast becoming a mainstay of the tour.

Mermelstein will surely be eyeing up the event as he vies to make it three-in-a-year for WPT titles.

Aaron is a beast. I had him as my captain in Fantasy Poker Manager for this tourney. I’m glad he won!