A Tale of Two Bracelets

In the wee hours of the morning on Oct. 16, two players won bracelets just minutes apart. Both winners were well known in the poker world though with very different stories. 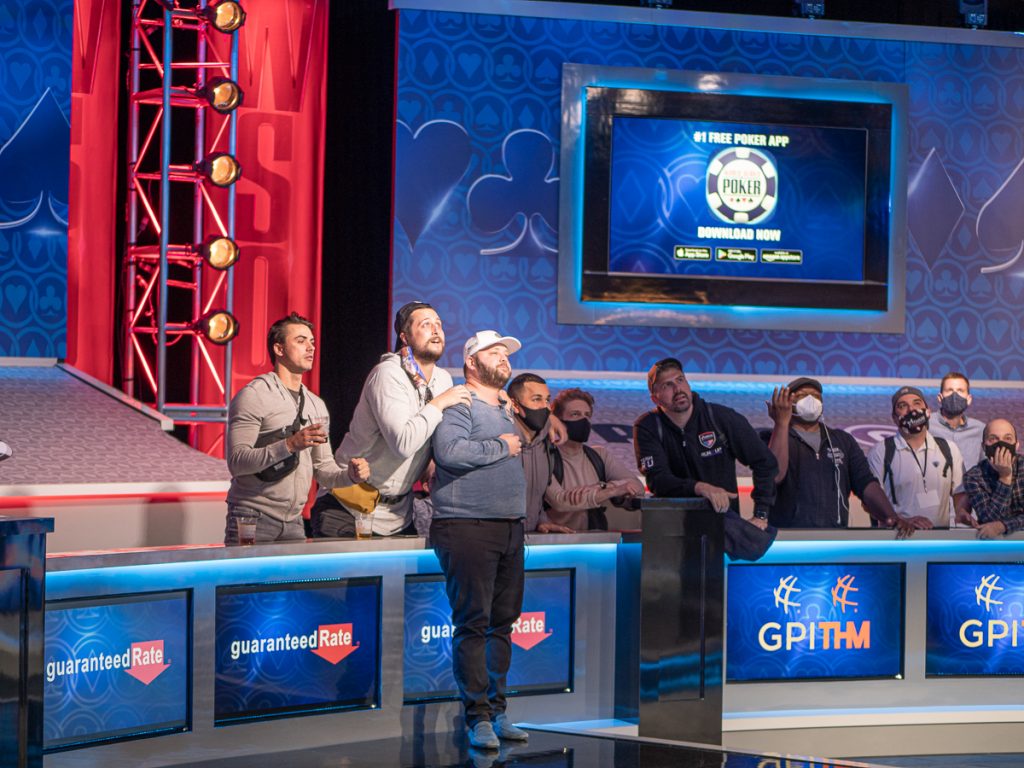 Scott Ball and his rail praying for a good run-out. (Image: Chris Wallace)

The first winner was Anthony Zinno, who took down the $1,500 HORSE event. Zinno bested a field of 594 players to win $160,636 and his fourth bracelet. Even more amazing; this was Zinno’s second bracelet in a week after winning the $10K Seven-Card Stud event. The two wins, and two more cashes, puts Zinno in a strong position in the Player of The Year race.

A large rail cheered for Zinno and posed with him in his official bracelet photos, holding up four fingers to celebrate the fourth win. His girlfriend, a massage therapist working at the Rio during the WSOP, posed on his lap with the bracelet, and a crowd of happy people surrounded him. A host of world-class players offered congratulations as the cameras flashed.

Zinno is pleasant, friendly, and well-liked in the poker world. He was the target of a Phil Hellmuth blow-up at the final table of the stud event he won a week ago, which sent poker Twitter into a tizzy with many people asking why the WSOP had different rules for Hellmuth when other players would have been penalized for such behavior. But Zinno, as he is known to do, took it all with class, and had nothing bad to say about Hellmuth after the rant. 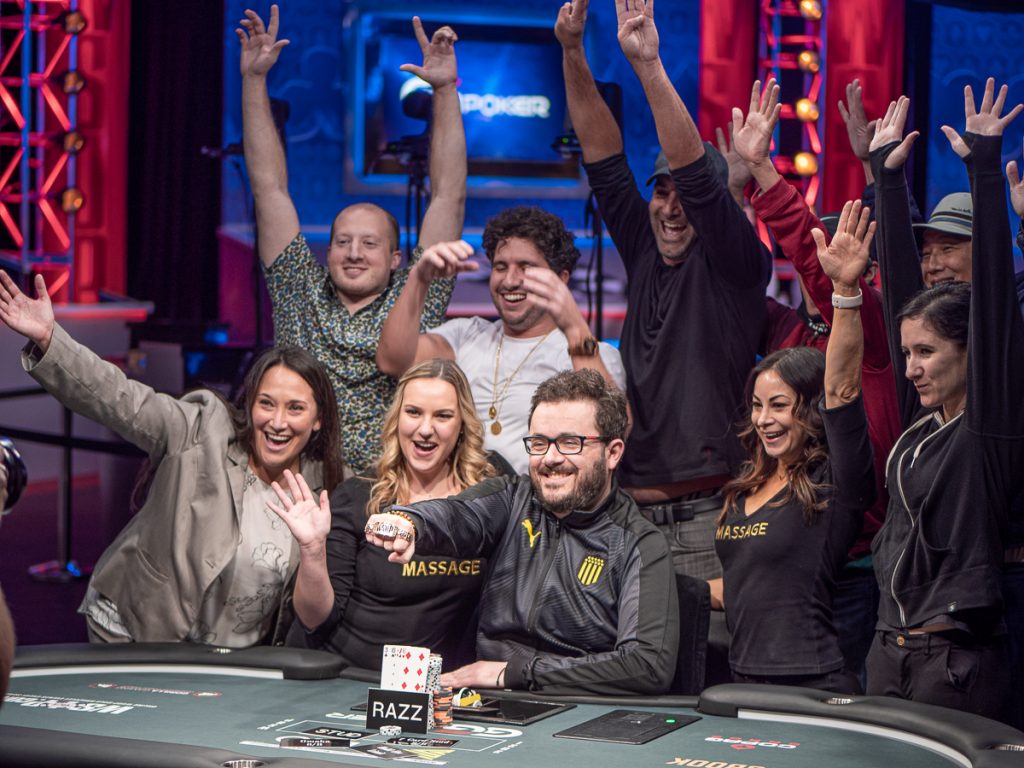 Zinno has amassed more than $10M in tournament poker winnings and is a regular in big cash games as well. Known for dressing well and offering a big smile for the cameras, Zinno is a star on the rise.

The second bracelet of the night, won just minutes later, went to Scott Ball of Oceanside, California. And a few in the room were not so happy about Ball’s victory. Once heralded as the creator of Twitch Poker, Ball was the head of poker streaming at the company for a few years until leaving in 2018 to start his own business, End Game Talent. After winning awards and accolades for bringing poker to Twitch and starting a new era of poker broadcasting, Ball focused on his business and working on his own poker skills.

But soon, rumors began to spread that Ball had colluded in a private online game hosted by Phil Hellmuth and won more than $700,000 in games that were not fair. In January, Mike Matusow came out with stunning accusations on his podcast, claiming that not only had Ball cheated Hellmuth and others in the game, but also that he had taken more than $1 million from Hellmuth to start his company and gambled much of that money away.

While Matusow’s rants are often dismissable, soon other players such as Doug Polk and Parker Talbot offered their own scathing criticism of Ball. No big names came to his defense initially, but the story wasn’t big enough to garner serious attention and Hellmuth had nothing to say about it. Some took his lack of willingness to defend Ball to mean that Matusow’s accusations were true. Others believed that with no confirmation, there wasn’t enough evidence for the allegations to stick.

Ball faded from the spotlight for a while, playing smaller events without a big score for a few years. His biggest win before his bracelet was less than $30,000, and his lifetime earnings were just over $100,000. 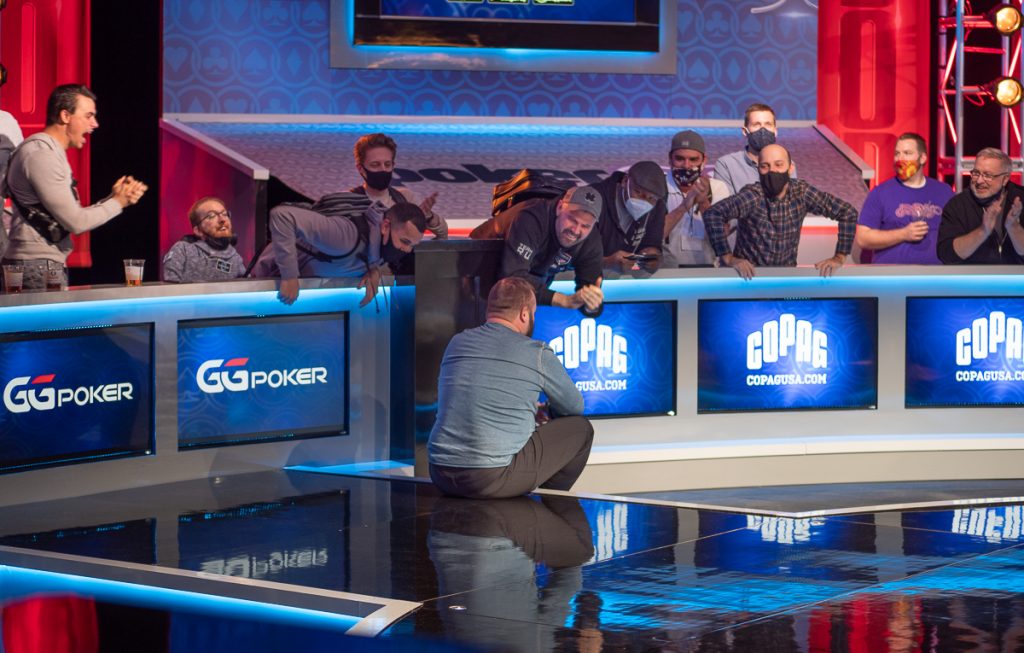 Overcome with emotion after the final card, Ball had to sit down for a moment while his rail went nuts. (Image: Chris Wallace)

Then, Scott Ball won a bracelet

That is, until the early morning of Oct. 16 when he won Event #25, the $5,000 6 max No-Limit Hold’em tournament that many consider one of the toughest fields in all of poker. Ball defeated Galen Hall, a pro who has amassed more than $5.5M in winnings. including a bracelet in the 888 event in 2018 for $888,888, and a win in the PokerStars Caribbean Adventure Main Event for more than two million dollars. The two embraced after the final cards were dealt and Hall even stayed for the televised interview.

Ball won $562,667 and the gold bracelet after a long heads-up battle; a sum worth more than five times his previous lifetime tournament earnings. A group cheered from the rail and hugged him when he won. Shouts of “Let’s Go Scott!” rang through the room, and Ball sat down on the edge of a step, overwhelmed for a moment after the last card fell to seal his victory.

But some pros in the room saw no cause for celebration and expressed displeasure at watching his victory, echoing Matusow, Polk, and other pros claiming his less-than-upstanding reputation was well-deserved.

I call @mikethemouth93 out on a lot of bullshit but what he says about recent bracelet winner Scott Ball in this video is spot on. Be wary in the scammer/scumbag streets boys & girls. https://t.co/gMkHJv9DM1

While Zinno’s bracelet celebration was a party filled with smiles and congratulations, Ball celebrated with his close friends and appeared to wipe tears from his eyes at one point, overcome with emotion after the victory. Further investigation into the accusations leave more questions than answers, with no one willing to go on the record, but many big names coming out in favor of Ball in off-the-record interviews and a few continuing to express their displeasure.

Given the fact that Hellmuth stopped by the final table to share a hug with Ball and Zinno appeared to be very happy for him, accusations that he stole from Hellmuth appear to be without merit. We suspect this controversy isn’t over, and if Ball keeps winning, as he believes he will, then there is more story to be written.