Thanks to a sponsorship by 888poker, fans across the pond will once again be treated to Europe’s biggest TV cash game. The German High Roller just kicked off its new 16-episode season exclusively on Sport1. 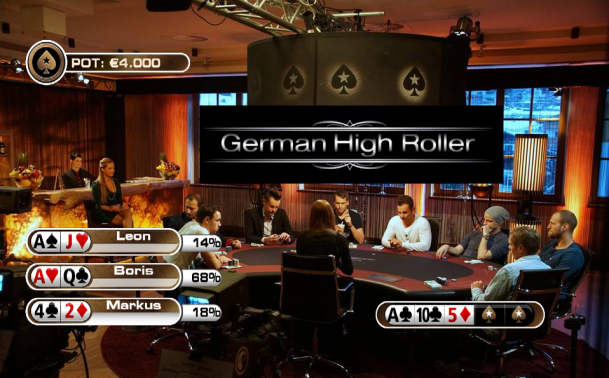 The controversial Leon Tsoukernik is one of the players slated to make an appearance on the new season of German High Roller. (Image: pokertronic.de)

This marks the 11th season of German High Roller, which was modeled after the now-defunct High Stakes Poker but geared toward Germany and surrounding markets.

“The dynamic is astonishing,” Swiss player Ronny Kaiser told Sport1 of the event. “We all know each other and we play very high limits.”

The players he’s referring to, who are confirmed to appear this season, include Quirin Zech, Vladimir Geshkenbein, 2014 World Series of Poker Player of the Year George Danzer, Ismael Bojang, Theo Jörgensen, and controversial King’s Casino owner Leon Tsoukernik, who’s been accused this year by Matt Kirk and Elton Tsang of stiffing players on millions of dollars loaned at the high-stakes tables.

The venues that have played host to the German High Roller in the past are the Alpine Palace in Saalbach-Hinterglemm, King’s Casino Rozvadov, and the Grand Casino in Lucerne.

New episodes began airing this past weekend and will continue through Nov. 26. If you’re in Europe or have access to Sport1, check your local listing.

The world’s second-largest online poker site has been making moves the past couple of years from launching the XL online poker series to expanding 888Live events around the world.

They’ve also made their presence known by sponsoring events. For the past three years, 888poker has sponsored the World Series of Poker, and they’re also the official sponsor of the Swedish Poker Championship. They don’t shy away from sponsoring both live streams and television shows either.

Earlier this year they inked a deal with Twitch star Parker “Tonkaaaa” Talbot, and even this week were sponsoring the inaugural Poker Masters.

A consequence of Black Friday was a huge rollback of poker sponsorships, which resulted in poker sites and networks pulling the plug on shows like High Stakes Poker, NBC National Heads-Up Championship, and Poker After Dark. Now, thanks to newfound sponsorships, such shows are slowly making a comeback, such as Poker After Dark, which was rebooted on PokerGO last month.

In honor of the German High Roller sponsorship, 888poker.de is offering a daily freeroll, one that will coincide with TV episodes, now through the end of the year. Players will have the opportunity to win a seat into next season’s German High Roller through the freerolls. The ultimate winner will receive €10,000 to play in the game and can subsequently keep anything they win