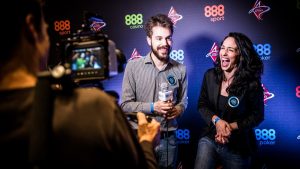 In recent years, poker festivals have become quite popular. PokerStars perfected the formula on the last two seasons of the European Poker Tour, and since then other outlets have followed in their footsteps.

The latest to do so is 888poker, which is revamping its live tournament offerings by introducing 888live Festivals.

These 11-day festivals will offer a variety of tournaments, longer structures, a wider range of buy-ins, and larger guarantees.

Such festivals will be held at different locations three times a year beginning with the inaugural 888Live Local London Festival at Aspers Casino from October 13-23.

The festival, hosted by 888poker Ambassador Kara Scott, will also see an £888 bounty on the heads of 888 Pros in the Main Event. That means if you knock out someone like Chris Moorman or Dominik Nitsche, you’ll not only have a story to tell, but some extra cash in your pocket as well.

A Look at Aspers London

Established in 2011, Aspers Venue caters to over 4,000 people a day. As for the poker room, which is spearheaded by Aspers Westfield Stratford City’s Head of Poker John Scanlon, they spread 40 tables with cash games running around the clock. They also offer two tournaments a day when they’re not hosting a major tour such as the World Poker Tour and Unibet Open.

In the past, the Aspers Poker Room has hosted some big names including Phil Ivey, Luke Schwartz, Sam Trickett , Bertrand “ElkY” Grospellier, and the late David “Devilfish” Ulliott.

888poker’s introduction of poker festivals comes a week after PokerStars announced an immense overhaul of their live offerings. Instead of numerous tours such as the EPTs, Latin American Poker Tour (LAPT), Asia-Pacific Poker Tour (APPT), etc., PokerStars opted to consolidate all their sponsored global live tours into either PokerStars Championship or PokerStars Festival events.

PokerStars and 888poker are primarily known for their online offerings, but it’s clear they’re both putting an emphasis on live events.