888poker, who is returning as an official sponsor of the World Series of Poker, is offering those who qualify for the 2017 WSOP Main Event on their site a shot at an eight-figure payday.

The “Supersize ME” promotion ensures the winner of the Main Event, provided they qualified via 888poker, will receive $10 million, the second-largest top prize in WSOP history. 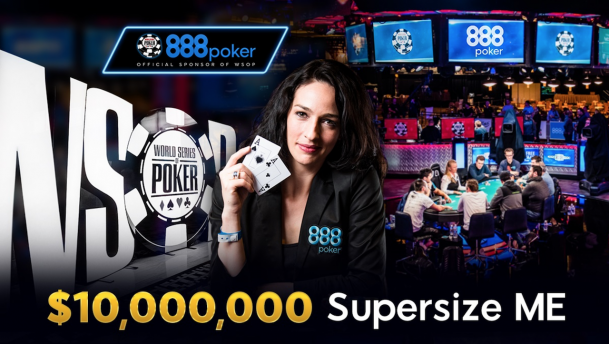 Kara Scott will be on the sidelines reporting the 2017 WSOP Main Event where someone will hopefully walk away with $10 million as part of 888poker’s “Supersize ME” promotion. (Image: 888poker)

The largest-ever first-place prize in the WSOP 48-year history, a robust $12 million, was awarded to Jamie Gold back in 2006. The UIGEA introduced shortly thereafter stymied poker’s growth, and since the top prize has been considerably lower.

In fact, the only other time it’s been eight figures is in 2014 when WSOP officials guaranteed $10 million to the winner. To achieve this, they had to slightly alter the prize pool payout structure. Swedish pro Martin Jacobson ended up winning that event. To put it in perspective, the last two winners, Joe McKeehen and Qui Nguyen, have been awarded $7,683,346 and $8,005,310 respectively.

There will be no prize pool alteration this year as 888poker is simply going to make up the difference between the regular payout and $10 million.

Those who qualify for this year’s WSOP Main Event via 888poker will be awarded a $12,500 prize package that includes five nights (July 9-14) at the luxurious Vdara Hotel Las Vegas, a $10,000 Main Event buy-in, $1,200 for travel and expenses, daily transportation, a VIP Welcome session, and an 888live poker kit.

Last year, 888poker offered a “Supersize ME” promotion that offered a $5 million bonus to any eligible qualifier who won the Main Event. Of the 6,737 players in the field, 148 from 30 different countries won their way in via 888poker qualifiers.

However, only 30 qualified via special “Supersize ME” satellites. The closest any of them came to the $5 million bonus was when Romania’s Joldis Cosmin made it all the way to Day 5, ultimately hitting the rail in 85th place for $67,855.

The odds will be even better this year as 888poker has done away with the specially-designated satellites, and anyone who qualifies via one of their satellites will be eligible for the bonus.

Had that been the case last year, it would’ve been quite the sweat as two players in the November Nine had satellited in on 888poker. Spain’s Fernando Pons won his way in via a €30 satellite, but had to settle for just $1 million after finishing in ninth place. Meanwhile, poker pro Griffin Benger, who just won the 2017 Irish Poker Open, fired approximately $1,000 into satellites before winning his way in. He turned that into $1,250,190 after finishing in seventh place.

Those two got in at a discounted price, but someone could actually get in cheaper as 888poker offers WSOP Main Event satellites for as little as 1₵ via their popular steps satellites. For those wondering, anyone who gets in for a penny and wins the Main Event would see a 1,000,000,000X return on investment.