888poker in New Jersey held its first-ever town hall event smack dab in the middle of the Garden State gaming jurisdiction on Saturday, May 21. In attendance were the company’s marketing representatives from the poker platform, as well as a smattering of online players, all gathered at the centrally located Fireside Grill and Bar in Marlboro, New Jersey. 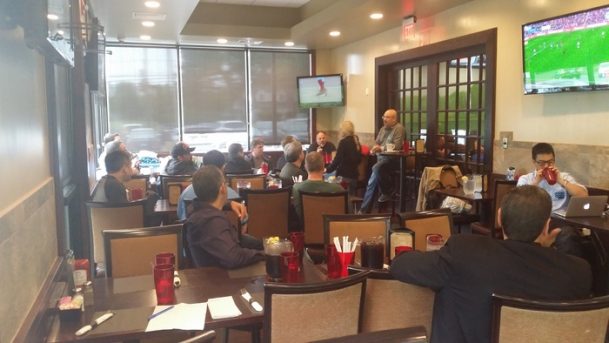 888poker gained invaluable insights into how its services are being perceived by players by hosting its first town hall event in New Jersey over the weekend. 888 marketing exec Chris Capra sits in front of door on right. (Image: CardsChat.com news exclusive)

CardsChat was the lone media outlet that showed up to hear what both sides had to say.

Roughly fifteen steady 888 customers, from seemingly all walks of life, voyaged to the meet-and-vent on what turned out to be a rainy and blustery Saturday afternoon. The two-hour chat encompassed feedback and opinions on how 888poker is serving the online gaming community, and perhaps more importantly, how to make it better.

888poker Director of US Marketing Chris Capra was on hand to field concerns, which was no easy task at times, as some brought rather firm critiques.

No attendee was more outspoken than Kevin Truong, a player who lives in New Jersey, but works in New York City. Truong expressed disappointment with 888’s geolocation technology, as his status often tethers between validated and invalidated while commuting on public transit.

Truong also condemned the network’s withdrawal speeds. Apparently running hot as of late (noting that he had some cashes coming in the thousands of dollars), Truong said multiple recent withdrawals took upwards of an entire week to process.

“I can’t get my money! It’s ridiculous,” Truong declared, the latter being a sentiment he repeated several times throughout the gathering.

There were several issues where players concurred, and hoped for improvement.

Truong was the lone Silver or higher 888poker rewards member, and the rest of the audience, who nearly unanimously said they play tournaments only, loathed the difficulty in ascending the Status Points ladder. Capra acknowledged the large gap from Bronze (200 points) to Silver (3,000 points).

Those in attendance also voiced resentment over 6-max tables dominating 888. Smaller tables make it much more challenging to beat rake, said one player, and calls for new protocols in notifying players or even entire tables when a 9-handed table is ready were heard.

Capra also inquired as to whether players are looking for a tournament series out of 888poker. The overall response supported the notion, though the consensus was that a series should be in addition to current weekly tournaments, and not simply replace regularly scheduled programming.

The revelation that required no town hall meeting is that players would also like to see higher purse guarantees. Truong opined that reducing guarantees is a sign of weakness and suggests 888 is conceding to other sites.

However, the 888 exec revealed that the network is preparing for an aggressive push when it comes to tournament guarantees. “We will be swinging harder in the coming months,” Capra said.

The majority also ruled in favor of the option to make deals towards the end of games, backed more freezeouts and knockouts, and yearned for multi-tabling options for mobile devices.

The players were mostly in agreement on many issues, and that extended to potential changes on 888’s part which the group collectively opposed.

When Capra suggested safeguarding newbies by creating new-player-only games, perhaps taking a page out of the daily fantasy sports playbook, the response from more experienced players was, not surprisingly, towards anti-safeguarding the novice. 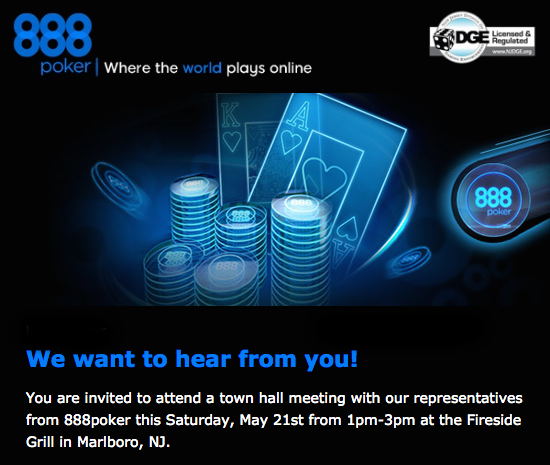 Let your voice be heard: 888poker had an open-door town hall, but only a smattering of players, and one media outlet in CardsChat, showed up. (Image: us.888poker)

Capra also revealed 888’s interest in entering the charity space online through a potential partnership, but the reaction was less than enthusiastic, even though Capra said a cash prize pool would still accommodate such a format.

When asked if trips and entries into live poker tournaments serving as prizes were of interest, the players seemed responsive with one exception: Sands Bethlehem is off the table.

Though he wasn’t mentioned by name, the presumed reason 888 players have no desire to travel to Sands Bethlehem is due to the resort’s billionaire owner Sheldon Adelson, the country’s biggest online gambling adversary.

Capra said it’s now been a dozen years since he ventured into the poker business in 2004 and wondered if players were growing tired of Texas Hold’em. The resounding answer was a firm “no.”

The afternoon in Marlboro was certainly a success for Capra and his team. Though plenty of critiques were heard, in the end, most of the players said 888 is still their preferred platform.

Capra was there to hear about what wasn’t working in the players’ minds, and that’s exactly what he received. The 888 marketing boss will now take the feedback to several “high-level ears” at 888.

Rick Blumenthal, an 888 player who runs Poker-Players-Unite, summed up the event by tweeting, “Thanks @chriscapra & the @888pokerNJ reps for holding the Town Hall today & giving us a chance to provide feedback. This is why I ❤ 888.”