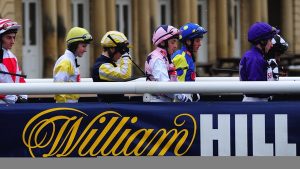 888 Holdings has teamed up with the Rank Group to launch a surprise bid for bookmaking giant William Hill.

The two companies have chosen to strike while the iron is hot; William Hill has been left vulnerable after the ousting of its CEO, James Henderson by the board last week, apparently for his failure to improve the company’s underperforming online operations.

888, with its technical talent, clearly feels that it could plug this particular hole. It also completely turns the tables on William Hill, a company that made attempts to acquire 888 last year, for a reported £750 million. That deal fell through when a major shareholder at 888 vetoed the takeover. 888, itself, was subsequently a favorite to acquire bwin.party, but was ultimately outbid by GVC Holdings.

The Rank Group, meanwhile, was once upon a time the UK’s largest film producer and distributor, but is now purely a gambling group; think a British MGM. It runs the country’s biggest casino chain Grosvenor Casinos, and biggest bingo chain, Mecca Bingo. It was also a one-time owner of the Hard Rock brand.

Faced with increased taxation and regulation throughout Europe, there has been a spate of consolidation within the industry over the past year, with new gambling giants formed by the mergers of Paddypower and Betfair, as well as Ladbrokes and Coral.

While 888 and Rank have not yet approached William Hill with an offer, it’s understood they have been in private discussions about such a move for a number of weeks, and were forced to issue an official statement only when The Times ran a story reporting rumors of the planned takeover bid.

“The Consortium [888 and Rank] sees significant industrial logic in the combination, through consolidation of their complementary online and land-based operations, delivery of substantial revenue and cost synergies and from the anticipated benefits of economies of scale which will accrue to all shareholders,” read the official statement.

William Hill, however, made it clear it’s playing hard to get, issuing a dismissive response the following day.