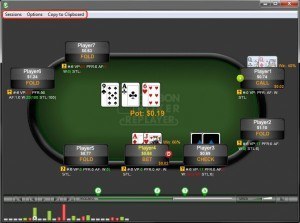 Carbon Poker, where recent disruptions have led to whispers of nefarious goings-on, including the possibility of a DDOS attacker stealing players’ pots. (Image: carbonpoker.ag)

Concerns were raised on the TwoPlusTwo forums following a series of unexplained interruptions over the weekend, which consistently appeared to benefit one player, with the screen name “L4ss3m4jj4n.”

According to posters, the server always appeared to crash when L4ss3m4jj4n was involved in a large pot and had just min-raised. With the other players unable to act due to the disconnection, the pot was then awarded to the suspicious min-raiser.

From forum poster “Naps”: “I found the hacker that is disconnecting the server. He builds big pots and, once he min-raises, he crashes the server and scoops the pot. He did it to me a few times and took quite a bit from me at PLO. I then followed him and watched him do it to others. I emailed support so let’s see what happens.”

Then, a response from poster “JohnFR”: “Guys, I would normally say this is just somebody coming up with a wild conspiracy theory, but this is serious, everybody should open up this table, it’s table 24 in the $215/125k, something is super, super-fishy about the way L4ss3m4jj4n is playing, every disconnect has benefited him so far, it seems too obvious if you watch it for a few of the disconnects.”

Hundreds of forum members then railed L4ss3m4jj4n and witnessed the suspicious activity occurring on numerous occasions and contacted Carbon customer support to relay their misgivings.

It wouldn’t be the first time that online gambling companies have been the target of DDOS attacks, although this is the first time that they would have been used for this purpose, if this is indeed what the forum posters were witnessing. Distributed denial of service attacks are usually used by criminals attempting to extort money from an online business by flooding the bandwidth or resources of a targeted system in order to temporarily disable its ability to offer services.

No feedback has yet been forthcoming from Carbon Poker, and we can only hope a full investigation is underway. There has been recent cause for concern about disruptions to Carbon’s servers, and not just last weekend.

On November 23, servers crashed, interrupting the Carbon Poker Online Poker Series. However, even more worryingly, during the disruption players reported their hole cards changing mid-hand; others even claimed that they were inexplicably able to access other players’ accounts when they tried to log back in.

Whatever the cause of the recent technical trouble, it’s clear that something very weird has been happening at Carbon. While the online poker room is one of the sites catering to the unregulated American market, a better-regulated and more accountable operator would surely be required to offer total transparency in the face of such suspicious occurrences.

This is some serious shit.

I used to play on Carbon.