The 2016 World Poker Tour (WPT) Legends of Poker at the Bicycle Casino in Los Angeles began with 687 players, but after four days of play, it’s now down to the final table of six.

And as the old saying goes, slightly paraphrased: age and treachery are holding court on the felt. 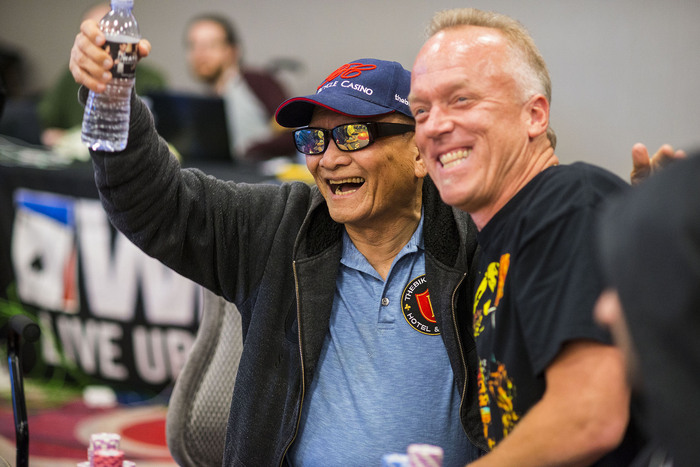 The two favorites to capture the $615,346 first-place prize are 77-year-old local William Vo and the slightly younger poker pro Pat “Flyin'” Lyons. Only a few weeks ago, Lyons took down the 12th Annual Arizona State Poker Championship for a career-high $241,700.

While those two have the big stacks, they face some stiff competition, including Benjamin Zamani and Upeshka De Silva. Back in July, Zamani finished runner-up to James Mackey in the WPT Choctaw Main Event, while De Silva won a World Series of Poker bracelet in 2015.

Speaking of Zamani, he is guaranteed 1,600 POY points in the event, which puts him in the lead for the Hublot WPT Season 15 Player of the Year race.

“The Dragon” Falls as Field Plays Down to Six

It happened when a short-stacked Pham moved all in for 535,000 from the small blind, and Todd Peterson called from the big, the latter holding the 9♥9♣. Pham was in trouble with his K♦8♠, and he was nearly left drawing dead after the A♥9♦7♥ flop gave Peterson a set. The 2♥ turn was all she wrote for David, and he was sent out the door after the 6♣ was run out on the river.

It marked the 17th WPT cash for Pham, and while he didn’t make the televised finale, it was his seventh final table appearance. But unfortunately for “The Dragon,” a WPT title has eluded him once again.

The final six players will return at 4 pm PT on Thursday to play down to a winner on the televised WPT Final Table.