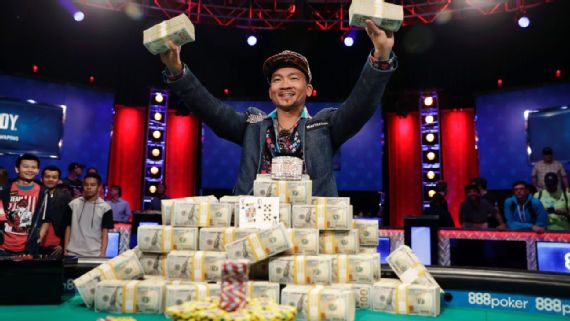 Poker fans were treated to a fireworks display on the first hand of Day Three at the final table. Short stack Cliff Josephy tangled with the Nguyen moments after Tournament Director Jack Effel announced “shuffle up and deal.”

And just like that, Nguyen’s massive chip lead tightened up. Josephy surpassed 100,000,000 and moved into 2nd place, slightly ahead of Gordon Vayo.

Momentum Shifting the Other Way

Josephy, feeling refreshed after doubling up, unfortunately rode his momentum into a brick wall. After Cliff raised pre-flop with 2♦2♣ and Vayo called with 3♦3♠, Nguyen three-bet in the big blind with A♠J♣. Both players called. A sick flop of 3♣K♦2♠ came out, putting Josephy in a position where it was almost impossible for him to avoid nearly going bust.

Despite completely missing the flop, Nguyen fired away, getting called by both of his opponents. The 4♦ peeled off on the turn. Nguyen gave up and checked, Josephy then confidently bet 21,000,000. Vayo, after a short pause, went all-in for 75,100,000.

Nguyen made the obvious decision to fold. Josephy didn’t make an instant call with his set. He appeared to question whether or not his monster hand was monster enough. But he couldn’t find a fold.

“I couldn’t fold,” he told his vocal group of Penn and Teller Theater supporters at the Rio, which included Jason Somerville and Shaun Deeb.

Needing a one-outer to bust Vayo and avoid being crippled, Josephy watched the 6♦ turn over on the river, leaving the two-time bracelet winner with less than 10 big blinds.

Looking to double-up with just 11 big blinds, Cliff put his remaining chips in the pot with Q♦3♦ in the small blind and got a call from Vayo’s K♥6♦. ‘JohnnyBax’ couldn’t get lucky this time. The board ran out K♣8♣3♥4♣2♣. The gig was up for one of the best online poker players of all-time. But his 3rd place payday of $3,453,035 was a nice consolation prize.

That left Vayo and Nguyen to fight to the poker death for the gold bracelet and that $8 million first place prize. It was an intense battle between two talented players.

Vayo began heads-up play with a 3/2 chip advantage, but it was short lived. Nguyen’s aggressive style of play took over the match. He bluffed his opponent off the best hand numerous times, hit a big river card, and flopped a few huge hands.

Before long, the original chip leader was at a 3/1 disadvantage. While Nguyen was busy firing bullets at the enemy, Vayo was hiding in an underground bunker, which appeared to surprise ESPN commentator Antonio Esfandiari. Vayo was coached by Tom Marchese, one of the best players in the world and 14th place finisher in the Main Event, prior to the final table.

“I don’t think he’s playing Marchese poker. I don’t think Marchese would be playing this passive,” Esfandiari said of Vayo’s playing style during the television broadcast.

We Have a New Champion

After 182 hands of heads-up play that was mostly dominated by Nguyen, the tournament came to an end well after 3:00 in the morning PST.

Prior to the Main Event, Nguyen only had $50,000 in career live tournament winnings. This was the first time he entered this event. Some might call his win improbable. Others will say he was extremely lucky. But we all must refer to him as the 2016 world champion of poker. And at almost 40 years old, age and treachery finally took home the prize for this fighter.

Congrants the new world champion
Showing great courage, Nguyen abused aggression to overcome a lethargic Gordon Vayo heads up. Patiently, he was undermining gradually the opponent’s stack never showed resistance. And the opportunities where Vayo managed to double up, the champion did not flinch and continued to put pressure.