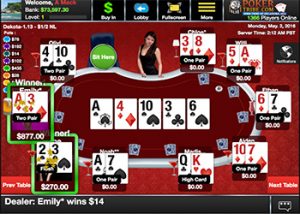 Pokertribe.com launched play-money poker this week, and we are digging those retro graphics! (Image: pokertribe.com)

According to a press release from the tribe, the free-play pokertribe.com is available to US residents outside Oklahoma and international markets and features poker, bingo and pull-tabs. The tribe neglected to say when it expected its real-money offering to go live.

The tribe originally applied to the state’s Gaming Compliance Unit last September, stating its intention to launch an international online poker site and asking for a ruling. The state called in an arbiter to offer an opinion on whether such a venture would violate the tribe’s compact with the state.

The arbiter, a retired Oklahoma Criminal Court of Appeals judge, wrote that the “use of the Internet is merely using technology to play covered [ie, Class II] games as a way to increase tribal revenues. It does not extend or restrict the scope of the games and does not amend the compact in any way.”

The Indian Gaming Regulatory Act 1988 (IGRA) states that tribes may offer Class II gaming (poker and bingo) on tribal lands, without a formal dispensation from the state.

Having gained state approval, the tribe received the federal rubber stamp in April when Judge David L Russell of the US District Court for the Western District of Oklahoma stated that there were “no genuine issues of material fact that preclude summary judgment in the tribe’s favor.”

The Iowas have been far more successful in their quest to offer online poker than California’s Iipay Nation of Santa Ysabel, who believe it is their sovereign right to offer real-money Class II gaming to anyone they want, provided the servers are based on their sovereign land. In this instance, the State of California and the federal government begged to differ and shut them down.

But by pursuing customers outside America, the Iowas are on firmer ground, although it’s hard to see quite how they can flourish in choppy waters of the international market, where even the most established operators are struggling to make a mark in the online poker vertical as worldwide traffic declines.

Furthermore, increased regulation and taxation throughout the world is making life even tougher for operators. For example, these days a site wishing to engage with customers from almost every country in Europe is required to apply for an expensive license in each and pay a point-of-consumption tax.

With little to differentiate itself from the pack, no traffic to speak of, and the look of a poker site from the early noughties, the tribe is fighting an uphill battle, although we wish them all the best.

Well all the Gringos but those in Oklahoma, so many potential players I will say.