It was only days ago that France won the 2018 World Cup in Russia, earning the country’s second world championship. But while it may still be over four years away, eyes are already turning to the 2022 World Cup, with many bookmakers already offering odds on the next global tournament. 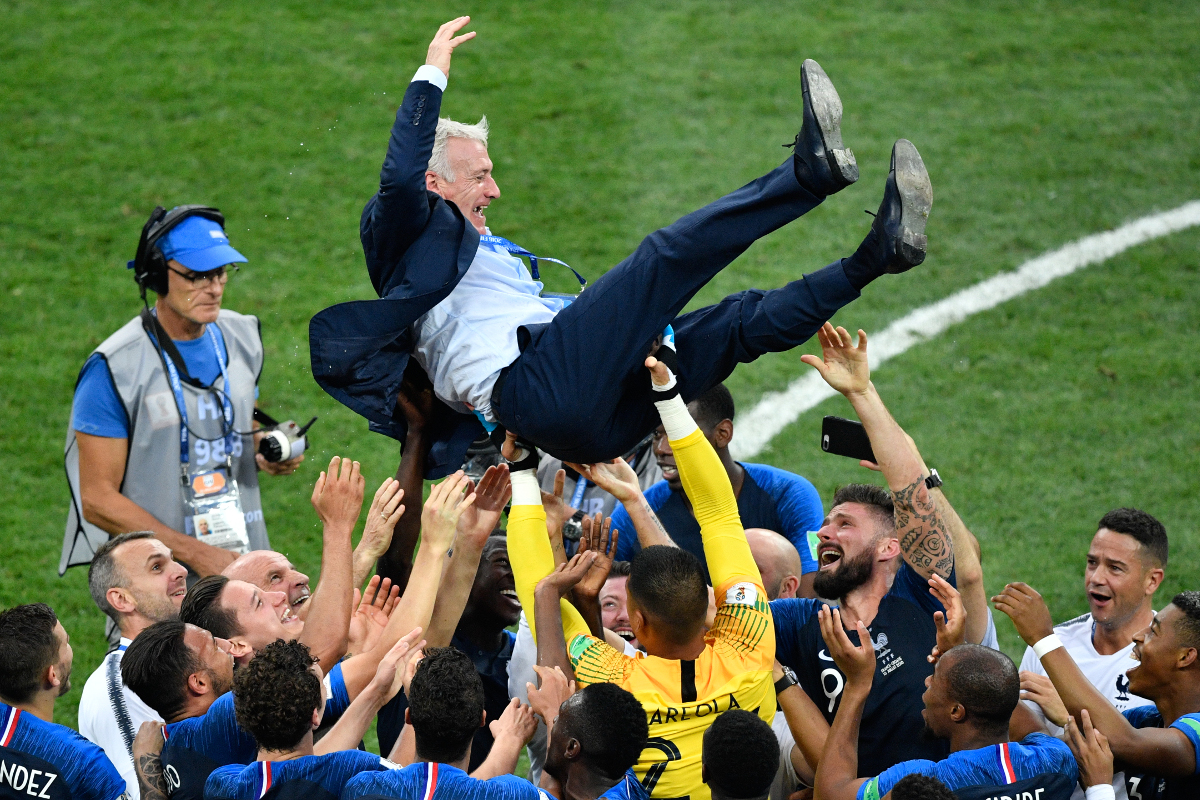 French players lift coach Didier Deschamps after their 4-2 victory over Croatia in the final of the 2018 FIFA World Cup. (Image: Alexander Nemenov/AFP)

With so much time before the next World Cup, it’s hard to project who will be playing for many countries, or even which nations will necessarily qualify for the tournament. But that hasn’t stopped bookmakers from posting odds on all of the likely contenders – and even some unlikely participants.

Depending on which bookmaker you look at, one of two nations could have the honor of being the very early favorite for 2022. At William Hill, France is the 9/2 pick to repeat as champions, just ahead of Brazil (5/1). Many other oddsmakers have gone in the opposite direction, with sites like Bet365 and Betway making Brazil the top choice instead.

At the other end of the spectrum, William Hill gives the longest odds on the board to both Saudi Arabia and South Korea, each of which is listed at 2500/1. But that’s only because not every country is listed on William Hill’s board: other bookmakers are offering odds on virtually every nation in the world, allowing bettors to make a lot of money if they successfully pick an unlikely World Cup triumph by a nation like Canada, Kosovo, or Cyprus.

Part of the challenge in setting these odds comes from predicting exactly who might show up to play in the tournament. Many of the world’s current top stars may not make it back for the 2022 World Cup, including Portugal’s Cristiano Ronaldo and Argentina’s Lionel Messi, both of whom are already in their thirties. Belgium’s Vincent Kompany and Croatia’s Luka Modric might also be out after helping their teams make historic runs through the 2018 tournament.

The unique scheduling challenges of hosting a World Cup in Qatar could also lead to some unpredictable results. Because summer temperatures in the desert nation feature normal highs of above 100 degrees Fahrenheit, the decision was made to shift the tournament to early winter instead. The 2022 World Cup will start on November 21, with the final scheduled for December 18.

That means interrupting most of the domestic seasons around the world. For instance, the English Premier League is likely to start in July (rather than August) in order to accommodate a long break just before Christmas. That midseason placement could mean more players who are fatigued or injured and have to miss the World Cup, adding another layer of uncertainty to any forecasts for the tournament.

For those who want to bet on world championship soccer without trying to make predictions four years in advance, the Women’s World Cup is only one year away. The United States is a 5/2 favorite at Bwin – far better than the 66/1 odds the USA men’s team has been given by William Hill for 2022 – with France (7/2), Germany (7/2), and Japan (8/1) right behind.

congratulations to France the great champion of the cup of russia ….. but a special greeting to Croatia the biggest highlight of this world championship, now as for the favorites I prefer that the Brazil selection was not among the favorites because the favorites are always being the first eliminated of the competition ….

hahahahaha I would not anticipate to predict about the next world cup, although it is true that Brazil is one of the teams that is almost always taken as a favorite in this world event, I imagine that because of its long tradition in that tournament, but not we have to get ahead, it’s four years and many things can happen, we may see new teams that have never managed to be in this event, and why not? They could surprise we must not anticipate the facts.