The 2020 WSOP is going global, and virtual. Due to COVID-19, this year’s series won’t take place inside the often chilly Rio Convention Center in Las Vegas. Instead, the 51st annual World Series of Poker will run online at both GGPoker and WSOP.com. 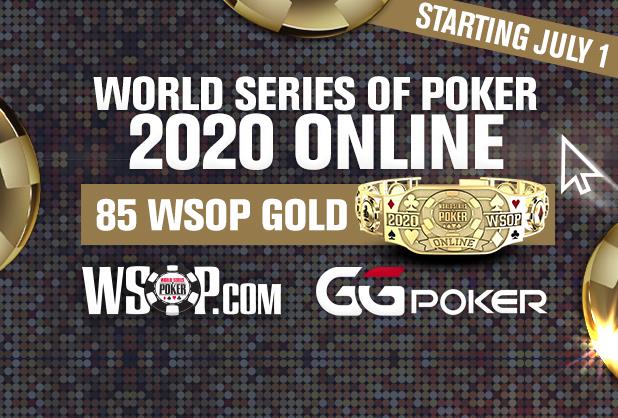 GGPoker will host the lion’s share of the series, covering 54 events, while WSOP.com will spread 31 tournaments. The series begins Wednesday, July 1, at WSOP.com. Each of the 85 winners will receive the same gold bracelet awarded to live World Series of Poker champions.

The 51st annual summer poker extravaganza had 14 online bracelet events on the schedule, along with 87 live tournaments. Then, the May series in Las Vegas was postponed due to the global health pandemic that’s still a major concern in the US.

Following the postponement, WSOP officials announced plans to host a live fall series in Las Vegas instead. No date was set, however. Given the recently announced online series and the continued spread of COVID-19, it now appears that a fall series in Sin City is unlikely. But, all isn’t lost for those who aspire to win World Series of Poker bracelets this year.

For the first time in its history, each of the 2020 World Series of Poker’s 85 bracelet events will be played online. As a result, players from around the world will still have the opportunity to compete for poker glory.

Full schedules haven’t yet been released, but the WSOP disclosed general details about its summer series, which will begin on July 1 and run through September 6. The series will begin on WSOP.com before moving to GGPoker, the site promoted by two-time WSOP Player of the Year Daniel Negreanu, on July 19.

WSOP.com is only available in New Jersey and Nevada, so if you’d like to compete in those 31 events, you’ll have to do so from within the borders of those two states. GGPoker is a global poker site that is not available in the United States. International players and travelers will be permitted to compete in the 54 GGPoker bracelet tournaments.

WSOP.com will host satellite tournaments into the various events leading up to the series for as little as $1.

“It wouldn’t be Summer without [the] WSOP,” Ty Stewart, Executive Director of the World Series of Poker, said in a press release. “While we are thrilled to be reopening our venues and optimistic about future offline events, we couldn’t be more excited about deepening our relationship with GGPoker and watching some history unfold online this summer.”

The new summer series is an extension of the WSOP’s existing relationship with GGPoker. In May, GGPoker hosted an 18-event online World Series of Poker Circuit series.

I agree that they couldn’t have a live event this year – I would not have gone. But this alternative is no good to me either – so for most of us in the US there is no WSOP this year.