Forget the world-class quarterback play that will be on display Monday night in the College Football Playoff title game between LSU and Clemson (8 pm ET, ESPN). The match-up isn’t just going to be about which signal caller — Joe Burrow or Trevor Lawrence — is more talented. What it will all boil down to, if you think about it, is simply a good, old-fashioned game of high-stakes poker. 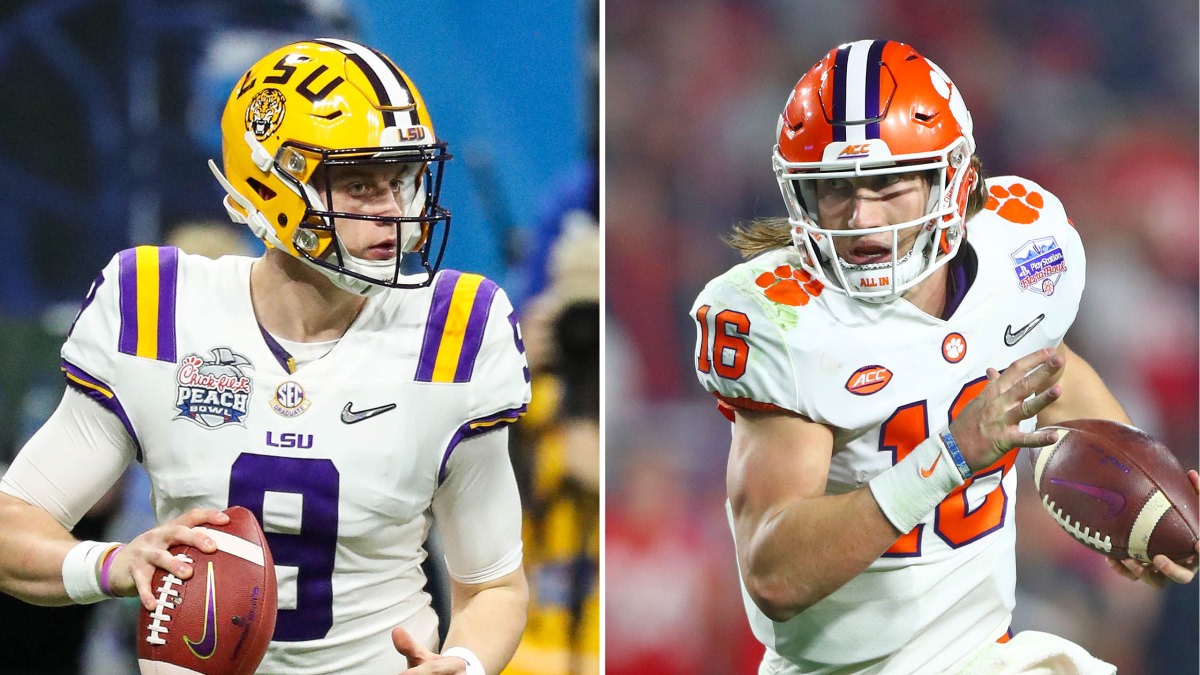 Skill Game? The College Football championship is Tigers vs. Tigers, and could showcase the greatest college football quarterback contest ever. (Images: Sports Illustrated)

It’s like they’re playing a tournament with no financial skin in the game, and we’re down to a heads-up battle with millions of dollars on the line. But instead of the players receiving the cash — the NCAA would rather they, the conferences, television networks, and the school’s take all the money, which is totally fair and all — they get the pleasure of being national champions for life.

On the felt, I mean field, LSU quarterback Joe Burrow is like Phil Ivey. He won the Heisman Trophy and set the Southeastern Conference regular season passing record with 4,279 yards. He doesn’t shy away from taking big risks, and he can beat you in various ways. Just ask Alabama, Oklahoma, and every other defense he embarrassed.

Burrow, an Ohio State transfer, will have his hands full against Clemson’s stingy defense, which allowed just 264 yards per game in 2019, second-best in the country behind Ohio State — the team Clemson beat last month, 29-23, in the PlayStation Fiesta Bowl.

On the other sideline, Trevor Lawrence, the now-sophomore who led his Tigers to a national title last year as a true freshman, has a perfect 25-0 record as a starter. Strangely enough, he might actually be the most talented quarterback in the game. He’s the 2018 Justin Bonomo of this championship contest. All he does is win.

Despite the once-in-a-generation quarterback match-up, this battle of the unbeatens — both teams are 14-0 — will come down to which coach plays his cards right, and knows how and when to execute a bluff.

College football is similar to poker in that luck is often the determining factor in many games. Clemson should thank the sports gods for being on their side against Ohio State or they wouldn’t have made it to the championship game.

Ohio State led 16-0 in the second quarter, which isn’t an insurmountable deficit. But at the time — to anyone objectively watching that game — it felt like the Buckeyes were up by much more. And they should have been.

The Buckeyes had three possessions of 70-plus yards that ended in a field goal instead of a touchdown in the first half. Sure, the Buckeyes’ red-zone failures were partially due to Clemson’s defense tightening up, but the lack of touchdowns were also the result of numerous self-inflicted wounds, such as penalties and dropped passes.

In the second half, it appeared Ohio State had recovered a fumble for a touchdown on a pass the refs ruled as complete. On review, however, the refs overturned the call, determining the pass was incomplete and Clemson would keep possession. Many fans argued on social media that the reversal was incorrect, and the call cost Ohio State the game.

That wasn’t the only bit of luck the Tigers benefited from in the second half. Immediately after Clemson drove down the field to take a 29-23 lead with under two minutes left in the fourth quarter, Ohio State mounted a potential game-winning drive deep into Clemson territory. Then one final lucky break sealed Ohio State’s fate when Buckeyes quarterback Justin Fields and his wide receiver had a miscommunication that led to an interception.

Out of his 354 attempts on the year, it was just the third interception thrown by Fields all season. Clemson has a darn good football team, but sometimes, it’s better to be lucky than good. Most poker players would agree.

Hyper-Aggression Pays off for LSU

LSU didn’t need luck to beat Oklahoma in the Chick-Fil-A Peach Bowl. They had aces in the hole, and the Sooners moved all-in with the 7-2 off-suit. Tigers head coach Ed Orgeron used an aggressive, Tom Dwan-style game plan (circa Poker After Dark) to win. He fired out massive bets, in a sense, taking repeated shots downfield as if he had no respect for Oklahoma’s soft secondary.

LSU won the game 63-28, but it was out of reach in the first half. The halftime score of 49-14 left Oklahoma with nothing but a chip and a chair, and that chair had broken legs. Orgeron’s aggressive, pass-happy strategy proved unstoppable. Joe Burrow was the star of the show, throwing for 403 yards and seven touchdowns … in the first half.

Orgeron and the Tigers now set their sights on the school’s first College Football Playoff championship Monday night. LSU won the 2004 BCS Championship Game under former coach Nick Saban, who some might consider the Doyle Brunson of college football.

The stage is now set. LSU vs. Clemson. Joe Burrow vs. Trevor Lawrence. Ed Orgeron vs. Dabo Swinney. Tigers vs. Tigers. The new kid on the block vs. the defending champs. We don’t know which team will come out victorious, but we’re fairly certain this high-stakes, heads-up match will feature some strategic, exploitative play.

Both teams are stacked offensively, averaging over 45 points per game. They’re loaded at wide receiver, running back, quarterback, and have future NFL draft picks on both sides of the line. So, how does any defense contain a high-octane offense that doesn’t appear to have any weaknesses? Or, for you GTO poker pros, what happens when Nash equilibrium is reached?

You take risks that would make Phil Ivey nervous. Using poker terminology in a football sense, that means this game might come down to which defensive coordinator – LSU’s Dave Aranda or Clemson’s Brent Venables – is willing to pull off a huge, timely bluff.

That could be dialing up a corner blitz on first down in a crucial situation. Or, showing blitz only to drop the linebackers into coverage. When you take massive risks, timing on the gridiron, like in poker, is everything.

The College Football Playoff began on Dec. 27 with four competitors. Now we’re down to the heads-up match with LSU, the #1 ranked team in the country and a 5.5-point favorite, against Clemson, the #3 team trying to extend its 29-game winning streak, and ship its third national title in four years. So, who is going to win?

Statistically, Clemson has the better defense, giving up 75 fewer yards per game than does LSU. But that’s about as misleading a stat as are a poker player’s Hendon Mob earnings.

Prior to the Ohio State game, Clemson had only faced one team — 24th ranked Virginia — that appeared in the final CFP rankings. LSU, on the other hand, faced four ranked teams during the regular season. So clearly, the competition hasn’t been equal.

In a match-up where the stakes are this high, past results are meaningless. If that statement wasn’t accurate, Chris Moneymaker wouldn’t have stood a chance against Sammy Farha in 2003. LSU’s tougher schedule isn’t going to make them better prepared for this game than Clemson. The Clemson Tigers are the defending champs. They’ve appeared in the CFP each of the past four seasons.

Experience in the College Football Playoff — or against tough competition — won’t determine the outcome of this game, however. The team with the coaching staff that successfully executes timely bluffs, and that isn’t afraid of putting all their chips in the pot when the game is on the line, will ship it.

I predict that team will be the Clemson Tigers, 34-31. Dabo Swinney has just enough gamble in him to out-class Ed Orgeron and win what just might be the most exciting heads-up match in college football history.