Flashback Friday: Dario Sammartino at Center of Most Controversial Hand from 2019 WSOP (VIDEO)

With the 2020 WSOP schedule having recently been finalized, this edition of Flashback Friday is going all the way back to a time when things were much simpler — 2019. Last year’s WSOP certainly had its fair share of controversial moments (shout out to the naked dude), but none more so than a hand involving eventual runner-up Dario Sammartino on Day 7 of the Main Event. 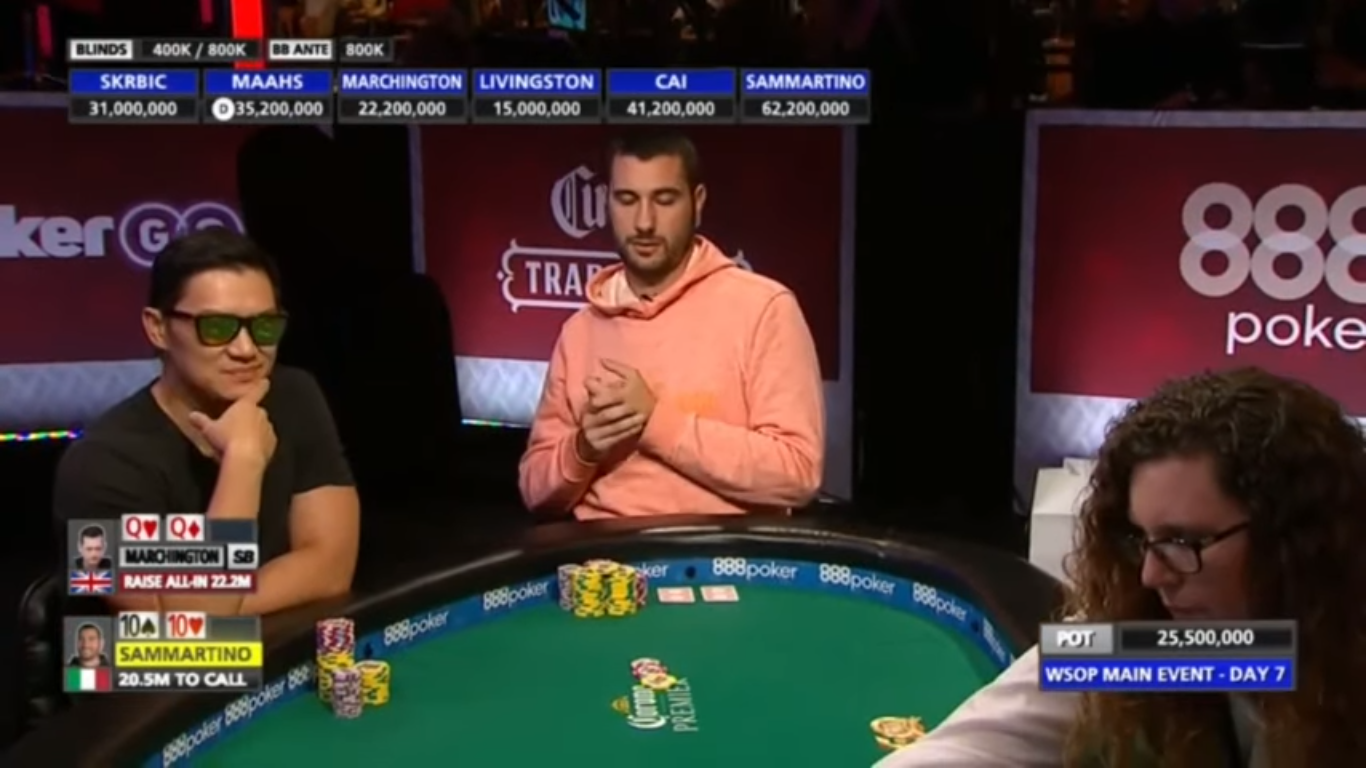 Sammartino had quite an incredible World Series of Poker in 2019., finishing runner-up to Hossein Ensan in the Main Event in Las Vegas for $6 million. The Italian high roller then traveled to Rozvadov, Czech Republic in October for another deep run, this time a fourth-place finish in the WSOP Europe Main Event for €341,702.

But he had one moment in Vegas that some were critical of, while others felt the blame was on Jack Effel, the tournament director. We’ll let you be the judge on who was in the wrong here.

You Make the Call

With the blinds at 400,000/800,000 and 11 players remaining in the 2019 Main Event — two spots from the elusive final table — Sammartino and Nick Marchington played one of the biggest pots up to that point. And the hand was also arguably the most controversial all series.

Sammartino entered the hand with the biggest stack at the table (62 million) and Marchington, with 22 million, doubled-up against the eventual runner-up with pocket queens against pocket 10’s. But it’s questionable if he should have received a full double-up. Joe Ingram analyzed the situation and shared the hand on his popular YouTube channel.

Sammartino initially raised to 1.7 million and then Marchington moved in for 22.2 million. But the dealer, after counting Marchington’s stack, announced the all-in bet was to 17.2 million. Her miscount may have caused Sammartino to call with the worst hand instead of folding. We’ll never know if that’s accurate or not, however.

Sammartino, once he saw the hand he was up against — queens — argued that his call shouldn’t have been binding since the dealer announced the wrong amount. But Effel ruled the 22.2 million call stands and wouldn’t budge.

Many poker fans on social media felt Dario would have called the full amount regardless and was only upset once he saw Marchington’s cards. They might be right, or they might be wrong. That’s something we can all argue until we’re black and blue in the face, but none of us can prove our stance. Only Sammartino knows the truth.

Marchington went on to win the hand and became the chip leader at the table on his way to a seventh-place finish for $1,525,000. Sammartino took a hit from the controversial hand but it all worked out in the end as he left the WSOP $6 million richer.

Incredible dealer error! In competitions of this level, the probability of errors should be reduced to zero! But the strongest will win!