Defensive Juggernauts on Display at 2019 Final Four, Virginia Favored to Cut Down Nets

A year removed from being the first top-seeded team to lose to a 16-seed, the Virginia Cavaliers are favored to cut down the nets at the NCAA Men’s Basketball Final Four in Minneapolis next Monday. 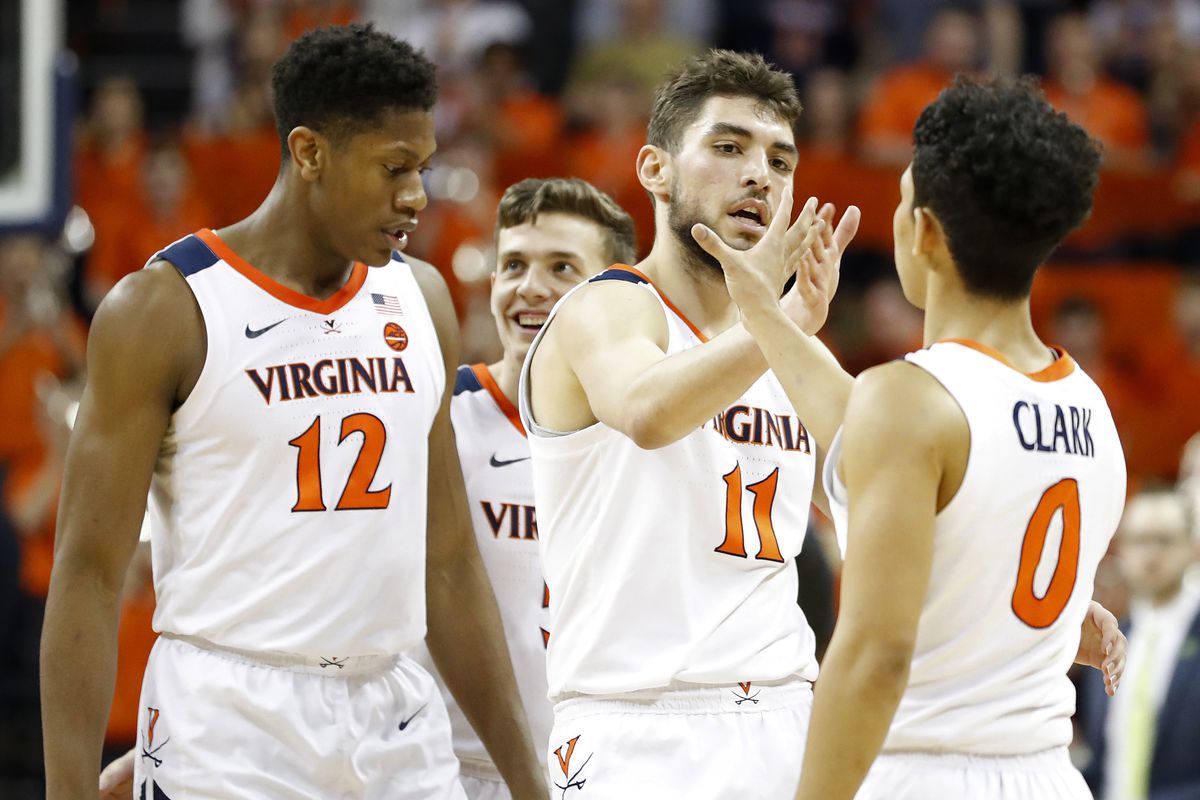 Virginia is the odds-on favorite to win the national title with the Final Four starting on Saturday. (Image: sportingnews.com)

Virginia defeated Purdue in overtime on Saturday to advance to the Final Four, a game they were fortunate to win. Purdue’s Ryan Cline missed a clutch free-throw that would have given the Boilermakers a four-point lead with 17 seconds left to play.

That gave the Cavaliers a bit of hope as the deficit was still just one possession. With five seconds remaining, Purdue fouled Ty Jerome which put Virginia in a tough spot. They needed three points to tie the game but it was only a two-shot foul.

Jerome made the first shot, cutting the deficit to two. He then intentionally missed the second shot and the ball was tipped out to mid-court on the rebound as the clock ran. With time running out, guard Kihei Clark tracked the ball down and quickly fired a pass to Mamadi Diakite who instantaneously shot and hit a short jumper as time expired to force overtime. Virginia went on to win it 80-75, advancing to the school’s first Final Four since 1984.

They face SEC Tournament champion Auburn, who also won in overtime in the Elite Eight against Kentucky, on Saturday at 3:09 pm PT. Michigan State and Texas Tech square off after the completion of that game.

Virginia and Auburn have about as much in common in terms of pace of play as a GTO solver and Phil Hellmuth. But it should be an entertaining match-up. Something has to give.

Auburn is the hottest team in the country having won 12 straight. That includes an SEC Tournament title and three-straight wins against higher-seeded teams in the NCAA Tournament. The Tigers are the first team in history to defeat a 4, 1, and 2-seed en route to the Final Four.

But despite that hot streak and having been an underdog the past three games, Virginia is a sizable favorite (-5.5). Auburn’s style of play greatly differs from its upcoming opponent.

The Cavaliers are a defense-first team that likes to slow down the pace of play. They force more athletic teams to play at a pace they aren’t comfortable with. Auburn does the same thing, except they make teams play faster than they’d like with a relentless press.

It’s no secret what the key is to this game. If Auburn forces Virginia to play up-tempo, they’ll win. If Tony Bennett’s squad turns it into a half-court game, they’ll win and will likely cover.

After beating Duke in a thrilling 68-67 battle on Sunday, coach Tom Izzo has his Michigan State Spartans back in the Final Four for the eighth time since 1999. They face the upstart Texas Tech Red Raiders, appearing on this stage for the first time in school history.

Tech dominated the top-seeded Gonzaga Bulldogs on Saturday in the second half after trailing by two at halftime, capping off a 75-69 victory. Chris Beard, in just his third year as head coach, has led his program to heights it hadn’t previously achieved.

As expected given the stronger national perception of Michigan State, the Spartans are favored but only by three points. Both teams are impressive on the defensive end and play well within the half-court offensively.

Virginia, however, is the favorite to win the national title. It’s all come full circle for the Cavaliers who became the first team ever to lose as a #1 seed in the first round last year, falling to 16-seed UMBC.