For the first time in nearly 10 years, the wait to know who will be the next WSOP Main Event champion has been reduced to days, not months. The table has been set, and a $8.15 million dinner is ready to be served. The guest list for this fantasy dinner party has a certain international appeal, with two Frenchmen, two Brits, and an Argentinian joining four Americans. And two of the players have been here before. 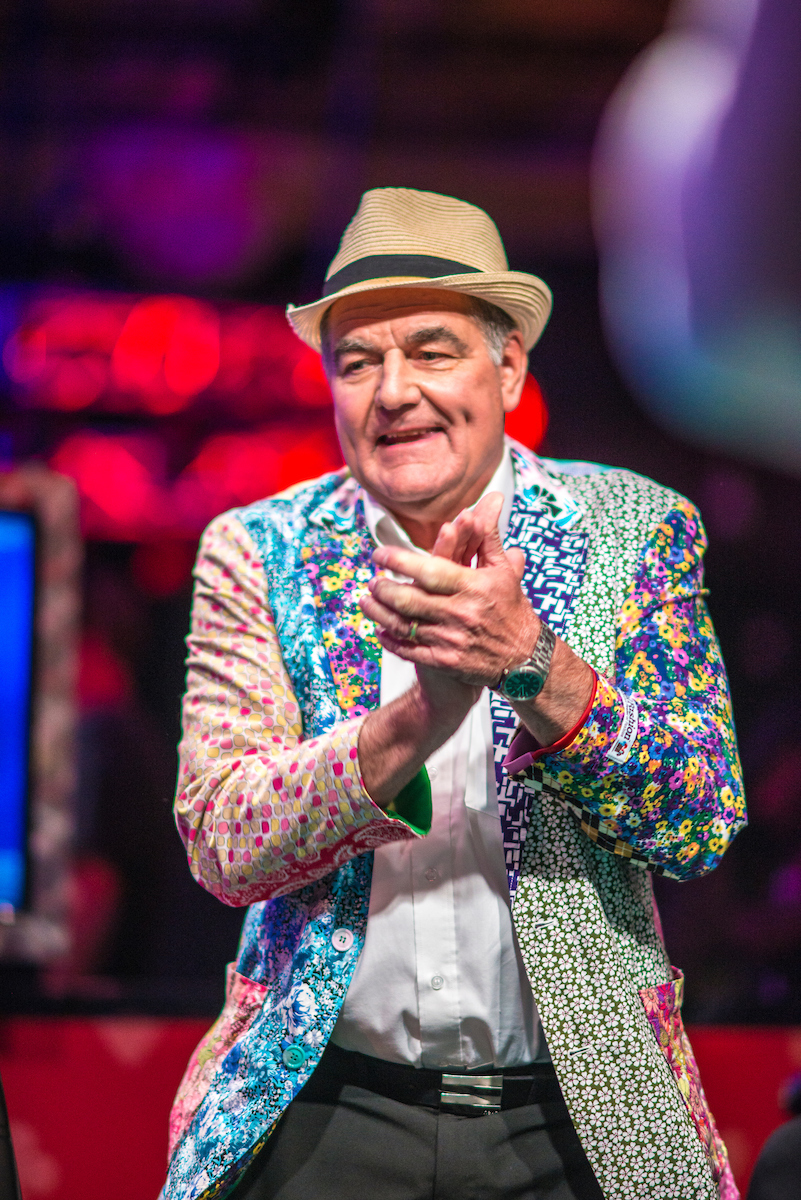 It’s time to celebrate. The final nine for 2017 have been set, and England’s John Hesp, second in chips, will be serving as the championship table’s colorful elder statesman. (Image: Drew Amato / PokerPhotoArchive.com)

Ben Lamb and Antoine Saout will be among the nine players who come back on Thursday to the Brasilia Room at the Rio, where they will be chasing chip leader Scott Blumstein, a grinder pro from New Jersey, for the championship payday and WSOP bracelet that matters most.

Michael Ruane, who finished 4th in 2016, was oh-so-close to making a back-to-back final table appearance. But unfortunately for him, somebody has to bubble.

At 12:30 am last night, after the elimination of Pedro Oliveira in 11th place, the final 10 convened at an unofficial final table to determine who doesn’t get to play.

Ruane hovered for most of Day Seven with a slightly below average stack, biding his time to make a move. He finally found the opportunity against his good friend Bryan Piccioli. They both had near-even medium stacks, with Ruane covering his pal by about 1 million.

Thirty-four million chips later, they were all-in pre-flop for a classic race.

Ruane held A♥K♦,and Piccioli turned over 10♠10♣. Both players nervously flipping for their tournament life saw the board run out J♥7♦5♦6♣7♥, leaving Ruane with barely more than two big blinds, which he surrendered a few hands later to finish in 10th place, taking home the most disappointing $825,001 possible.

With his elimination, we now have our official 2017 Main Event final table of nine players, all guaranteed to win at least $1 million.

Monday Almost Made Its

Day Seven on Monday began with 27 remaining players, each guaranteed at least $263,532. The next pay jump, a significant one, wouldn’t occur until play was down to the final 18.

Robin Hegele was the first to go early in the day and was quickly followed by Michael Sklenicka in 26th place.

Marcel Luske, for the third time in his career, came up just short of the final table, busting in 23rd place, but singing to the crowd on his exit that it was time for him to go. Christian Pham, the chip leader heading into Day Seven, was eliminated in 19th place.

John Hesp, 64, is the oldest and most colorful player remaining, and he’s second in chips. The Brit livened up the Rio with cheerful banter and an unpredictable style of play.

He’s quickly become a fan favorite, and one of those fans is ESPN/PokerGO commentator and poker pro Antonio Esfandiari.

“I absolutely love this guy,” Esfandiari said numerous times during the broadcast.

Hesp doesn’t have much major poker tournament experience, but he claims to have something in common with the President of the United States.

“I am to poker what Donald Trump is to politics, an amateur,” he joked.

View From the Bottom

Ruane wasn’t the only player chasing history on Monday. Damian Salas, 42, is the first Argentinian-born player to make the Main Event final table. This is his third career cash in Main Event. He charged his way to the 2017 final table wearing an Argentinian flag as a cape.

To be sure, no matter where he finished, he’s sure to be a superhero in Argentinian poker lore.

If experience matters in poker, Ben Lamb and Antoine Saout should have an edge. Both have made three deep runs in the Main Event against massive fields.

Lamb finished 14th in 2009 and 3rd in 2011. Saout was eliminated in 3rd place in 2009 and 25th place in 2016. They both knew what it took to get here as the pressure built over the weekend, and both should have an idea of what to expect as the field of guaranteed millionaires shrinks.

Both also are shorter stacks, so they start with an uphill climb.

With them near the bottom is Jack Sinclair, who could be in a better position, but first he had to learn that aggression doesn’t always pay. It’s hard to be disappointed to make the final table knowing you’re guaranteed at least $1 million. But Sinclair may have gone home early Tuesday morning kicking himself.

Sinclair used well-timed aggression over and over for much of Day Seven to take over the chip lead, surpassing the 60 million chip mark at one point. But after pushing the table around for hours, bluffing pot after pot, he was forced to slow down. Sinclair finished with just over 20 million chips after running into a couple of coolers and failed bluffs.

The PokerGo app has done its duty. Now ESPN takes over the screen. The final table will be seen on ESPN or ESPN2 in its entirety, and begins on Thursday at 6 pm PT. The day will conclude after three players have been eliminated.

Day Two of the final table on Friday starts at the same time. Again, play runs until three players bust. The last day of the tournament, Saturday, kicks off at 6 pm and will play down to a winner.

Aging Cause for Concern?

The bad news is only 347 of those entries came from the 21-25 age bracket. That’s not a good sign for the future of the game. A concerned Doug Polk offered up an explanation:

“The trend should be one of the most concerning ones for the future of poker IMO. Black Friday is wiping out the younger age players,” the High Roller for One Drop champion wrote on Twitter.

Slightly more than half the field were age 36 and above. Poker has struggled to capture the female and under 25 demographics in recent years.