The 2017-2018 World Series of Poker Circuit schedule has been announced. A record 26 stops are planned beginning Aug. 2 in Cherokee, North Carolina. The season will wrap up May 10, 2018 in New Orleans, Louisiana. 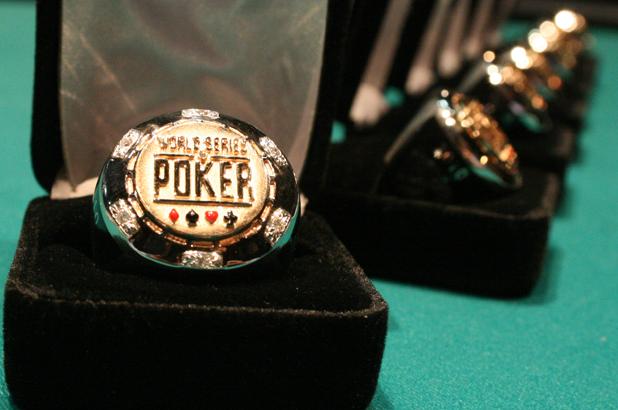 Lords of the Ring: The WSOP Circuit schedule is out for the 2017-18 season, featuring a record 26 stops. (Image: WSOP)

Two other stops have been noted on the WSOP Circuit calendar, but destinations and tournament details have not yet been announced.

Each stop includes a series of tournaments leading up to a Main Event. A Circuit ring is awarded to the winner of each event. The season concludes with the $1 million guaranteed Global Casino Championship, previously called the National Championship, before allowing winners of European and Asian WSOP events to qualify.

The WSOP introduced circuit events in 2005. ESPN even televised some of the initial circuit tournaments. This, of course, was during the poker boom era when networks competed for poker they could broadcast, as poker coverage at the time was a major prime-time ratings grab.

Since then, the WSOP-branded tour has evolved and grown. Players fight for gold rings, instead of bracelets, in events that cost less to enter but still offer significant prize payouts.

Whereas typical WSOP summer bracelet events cost between $1,500 and $10,000 (with the occasional $100k or million-dollar event), Circuit tournaments come with buy-ins as low as $150, with main events that typically cost $1,675 to enter.

High-stakes “bad boy” Jean-Robert Bellande became a household name thanks in part to his charismatic appearance in a 2005 Circuit event that aired on ESPN. Over the years, the WSOP circuit has been a magnet for notable up-and-comes, and over the years has attracted the occasional high-stakes pro.

Men “the Master” Nguyen, for example, has seven WSOP bracelets and four WSOP Circuit rings. His circuit victories have paid between $40,000 and $230,000. Chris Ferguson has five bracelets (including one for the 2000 Main Event) and three WSOP Circuit rings. Daniel Negreanu has just one circuit ring, from Tunica in 2005, which paid a whopping $755,000 for the win.

The current record is nine Circuit rings, held by both Alexandru Masek and Valentin Vornicu. Canada’s Ari Engel has eight. The live tournament specialist (and former online player of the year) has nearly $4.8 million in live tournament winnings. These include more than $325,000 in cashes over the past month.

Engel won the Mid-States Poker Tour Milwaukee Main Event in April for $114,876. The MSPT is one of several low-to-mid-stakes tours that have followed in the WSOP’s footsteps by offering lower buy-in tournament festival experiences.

Now in its 13th season, the WSOP Circuit tour is currently wrapping up at Harrah’s New Orleans. The year saw a record 100,000 entries at 22 stops.

David Aker, Charles Moore, and Joshua Vizcarra are deadlocked at 227.5 points. Aker is the only one of the three to win a ring this season, giving him automatic freeroll entry into the Global Casino Championship. This culminating event for ring winners comes with televised coverage on ESPN and a guaranteed $1 million added to the prize pool.

(The top 100 point-finishers who did not win automatic seats are invited to buy in to this bracelet-bearing WSOP event for $10,000, of which 100 percent goes to the prize pool.)

The 2016-17 Season will end as the new season begins. The 2017 Global Casino Championship will take place in August at the Harrah’s Cherokee Casino Resort in North Carolina, in the middle of the first stop awarding rings for the 2017-18 WSOP Circuit.