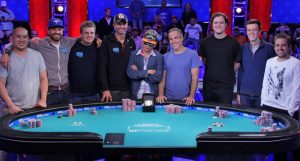 The World Series of Poker is done and dusted for another year, which means it’s time for us to point out that the real winner in all this was not the Main Event champion at all, but the IRS.

In fact, it’s become something of a customary cliché at this time of year.

But once the various slices of federal and local taxes have been removed from the money pie, how much is left for the players? How much did they really win?

Thankfully, the website taxabletalk.com has crunched the numbers for us. This is good, because we have enough trouble calculating our own taxes let alone other people’s.

You may as well just move all-in every hand.

For all New Jersey’s many delights, it is no tax haven.

How Much Did Nguyen Win?

So what about Qui Nguyen? Well, this year’s champ had the good sense to live in Nevada, which means he pays zero state income tax.

That means Nguyen’s tax bill will come in at just 41.51 percent on his $8,005,310 first prize. While he won the most, he will pay the second lowest of all the Americans at the final table, after South Florida’s Jerry Wong.

Gordon Vayo gets the worst of it, though. The 2016 Main Event runner up is foolish enough to hail from San Francisco, which means he will pay 51.46 per cent. Yes, that is more than half his winnings.

Well, unfortunately, it always goes to a foreigner, and in particular a foreigner who lives in a country that has a tax treaty with the US and where gambling winnings are untaxable.

This year, that man his Kenny Hallaert of Hansbeke, Belgium, who will pay a big fat zero on his $1,464,258 winnings.

Incidentally, the “unluckiest” World Series winner of all time was Peter Eastgate. After winning $9 million at the 2008 Main Event, he was presented with a $6.6 million bill from the Danish government, calculated by a 45 percent charge on winnings up to $520,000 and 75 percent on the rest. Ouch.

EVEN IN SMALL BUY IN TOURNEYS,THE HOUSE USUALLY ENDS UP WITH 2ND OR 3RD PLACE PRIZE MONEY AFTER THE RAKE…DO THE MATH…WOW..EASTGATE GOT ROBBED….WHEN SOMEONE WINS THE LOTTERY..SAY100MILLION…AFTER TAXES THEY MIGHT GET 40M….CASH GAMES ARE A DIFFERENT STORY…NEVER CASH OUT MORE THAN 8K AT A CASINO WINDOW AT ONCE…SAVE THE CHIPS AND KEEP CASHING A LITTLE AT A TIME OR YOU WILL GET A 10/40 IRS FORM RIGHT THERE AT THE WINDOW..IF YOU TRY AND CASH FOR OVER 10K IN CHIPS..THE IRS IS TOTALLY OUT OF LINE