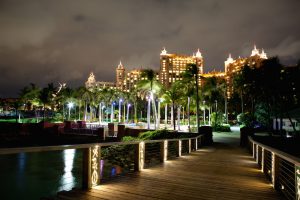 PokerStars is set to host a $100,000 blackjack tournament for the first time at the 2016 PCA. (Image: PokerStars.com)

The 2016 PokerStars Caribbean Adventure (PCA) is shaping up to be another impressive spectacle thanks to the inclusion of a $100,000 blackjack event.

Continuing PokerStars’ tradition of giving players more ways to make money while having fun in the sun, the $500 tournament will give players a chance to test their skills in a slightly different setting than normal.

The 2016 PCA will run between January 6 and January 14 and this time around there will be more than 100 events on offer inside the Bahamas’ Atlantis Resort, Nassau.

A New Addition to the Schedule

Alongside the regular selection of 6-max, PLO, high rollers and, of course, the $5,300 PCA Main Event, 216 players will be able to compete for a $100,000 prizepool in the first blackjack event to be held at the Caribbean event.

Set to get underway on January 8, the tournament will be a shootout and players that make it past the first will be guaranteed a return of at least $1,000.

The tournament will start with six players per table and the opening round will see 15 hands dealt before the player with the largest stack will progress through to the next stage.

In addition to offering an entertaining aside from the main flow of poker action at the PCA, the new blackjack tournament will be seen as an extension of PokerStars’ recent online evolution.

Since Amaya took control of PokerStars, the number of non-poker provisions has increased dramatically.

This focus on all areas of the gambling world is now becoming a part of the company’s live offerings and the forthcoming blackjack tournament at the PCA is the latest example of this growth.