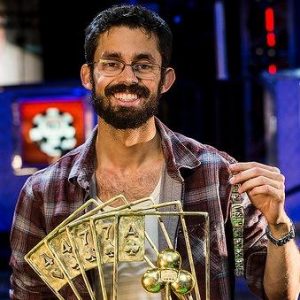 Mike Gorodinsky looks to hold on to his lead in the 2015 GPI WSOP Player of the Year standings. (Image: Poker News)

The 2015 GPI WSOP Player of the Year title race appeared to be all but over after the series concluded this summer in Las Vegas.

As it turns out, the race is just beginning to heat up.

It was a magical summer for one of poker’s brightest young stars. Mike Gorodinsky won a bracelet, finished at the final table 4 times, and cashed 7 times, leaving him with a big lead on the Player of the Year standing entering WSOP Europe.

Gorodinsky’s lead remains, but he still needs to hold off a few competitors thanks to a 4th quarter comeback. Shaun Deeb, Brian Hastings, and Anthony Zinno are right on his tail with 3 WSOP Europe events remaining. Paul Volpe sits in 5th place in the standings, but isn’t competing.

All players in the top 5 are within 300 points, meaning they could still unseat Gorodinsky with a strong performance in the remaining WSOP Europe events.

Mike Gorodinsky has more than $2.5 million in live tournament earnings since 2008. He’s been knocking on the door of greatness for the past few years.

Gorodinsky won a bracelet in 2013 in the $2,500 Omaha/Stud Hi-Lo event and had 6 cashes in the series prior to 2015, but it wasn’t until this past summer where Gorodinsky showed he is among the top players in the world.

After coming so close to winning his second career bracelet, Gordo took down the difficult $50,000 The Players Championship, winning $1,270,086. Gorodinsky dominated the colorful Jean-Robert Bellande heads-up. Following the match, Bellande admitted he was outclassed.

Gorodinsky had a magical summer, but he has yet to wrap up the coveted GPI WSOP Player of the Year award.

The Best of the Best

The 2015 Player of the Year winner will be in elite company. This award has been presented since 2004, with some of the top players of the 21st century having previously won the award.

In 2004, Daniel Negreanu won the award after winning a bracelet and achieving the final table 5 times. He also claimed victory in 2013 and is the only two-time winner.

Gorodinsky is close to joining some elite company, but he’ll have to hold off stiff competition to seal the deal.

Am I the only one in the world who doesn’t care about the WSOP? I used to care. I used to watch every event on TV or download them and watch them over and over. There are too many events now, too many rules, too few personalities. Delaying the Main Event final table until November was the final nail in the coffin for me. I don’t even know who the November nine are this year(or last year) and I don’t really care. I’m someone who plays poker 7 days a week, from 8 to 16 hours a day…I eat, sleep and breathe poker but I’ve lost all interest in the WSOP.