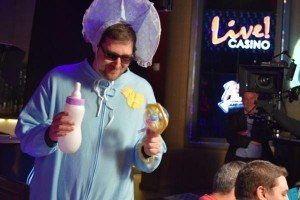 From Phil Ivey’s edge-sorting to Phil Hellmuth’s baby suit, 2014 was a strange year for poker. Here are our five craziest moments in poker for 2014.

August 1, 2014 started off quietly enough at CardsChat Towers. Outside, drops of silver dew glittered on the grass, while sunshine flitted through the trees, and the air was filled with birdsong.

Then came the tweet that rocked the poker world and sent the Twittersphere reeling in horror, and somehow we knew that life would never quite be the same again.

It was from Phil Hellmuth: “I am dressed up as a baby on the set of ‘Poker Night in America!’ W a onesie, a bonnet, a bottle & a rattle.”

Middle-aged break down? Or maybe this was how Phil dresses all the time in private and he had simply forgotten to get changed that morning.

Thankfully, the truth was more prosaic. Phil had merely lost a last-longer bet and was fulfilling his somewhat humiliating end of the bargain.

The Twittersphere breathed a sigh of relief.

In September we discovered that Gus Hansen had reached a gut-wrenching, toe-curling career nadir of 20 million in losses at the high stakes online cash tables.

Yes, the Great Dane’s return to the nosebleed games at Full Tilt when the site was re-launched in 2011, coupled with his desire to play anyone at any time at any stakes, had proved completely disastrous.

Hansen has lost just under $18 million since then, and the Gus Hansen account is now the single-most losing account in the history of online poker.

Gus is clearly a wealthy man, but that’s enough to make anyone want to throw up, no matter who they are. And no, we don’t know where he gets his money from.

While Hansen was busy losing millions, Phil Ivey was cleaning up at the baccarat tables. They say the guy could find an edge on a sphere, and his edge-sorting shenanigans and subsequent court battles have kept us enthralled throughout the year.

First, Ivey sued Crockfords Casino in London for $12.5 million in “winnings,” which the casino withheld because it believed he cheated. Ivey was edge-sorting at the punto banco tables, a technique that involves “reading” the backs of cards.

Ivey believes it’s legit, of course; Crockfords begged to differ. The casino won round one in the London High Court, but Ivey is appealing.

Meanwhile, on the other side of the Atlantic, in the city named for the aforementioned ocean, the Borgata decided to sue Ivey for fraud in an attempt to recoup $9.6 million, which Ivey had relieved from it under similar circumstances.

While all this was going on, Ivey was busy applying for a license to sell medical marijuana in Nevada. It’s a different world, it really is.

2014 was the Year of Daniel Colman, who went on the streak of a billion lifetimes, and treated each earth-shattering victory with a look of growing distaste, like he was chewing on a burnt pistachio nut.

Colman was like a man trapped in a terrible Twilight Zone: a guy who hated winning but simply couldn’t stop himself. And boy could he not stop! Colman picked up $22,209,549 in just under a year.

He made 10 final tables during that period, of which he won four, including the EPT Grand Final Super High Roller and the Big One for One Drop.

Colman is a guy you either love or hate, kind of like the Kardashians.

A huge spike in the shares of relatively unknown developer Amaya Gaming raised some eyebrows back in May. What on earth was going down, we wondered.

Rumors were filtering through that Amaya was about to buy PokerStars, which sounded ridiculous. But the joke was on us.

Amaya completed its $4.9 billion purchase of Full Tilt in early August, ushering in a new era, which, the company hopes, will involve conquering America.

Stay tuned for our Craziest Moments of Poker 2015, in 12 months’ time, to find out if they did.