The Detroit Lions don’t give Michigander Ryan Riess many opportunities to celebrate. So, the fan of one of the NFL’s most mediocre franchises did some winning of his own. The former WSOP Main Event champ scooped another major tournament on Thursday, the $10,000 buy-in WPT Seminole Hard Rock Poker Finale Main Event, pushing his lifetime total live earnings just past the impressive $10 million mark. 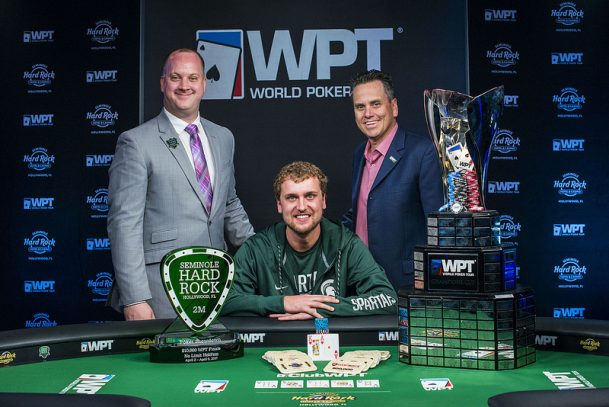 But he’s still not the Wolverine State’s all-time winningest pro: that honor yet belongs to fellow WSOP Main Event champ (2009) Joe Cada, who is beating Riess by just under half a million for that claim to fame.

He becomes the sixth former WSOP Main Event champion to join the WPT Champions Club (Doyle Brunson, Dan Harrington, Scotty Nguyen, Carlos Mortensen, Joe Hachem are the other notable five). In doing so, Riess earns an automatic entry into the season-ending Tournament of Champions (TOC) which begins on Friday from the Seminole Hard Rock Hotel and Casino.

Can he go back-to-back?

“I’m very excited, I’m going to celebrate tonight, and try to win back-to-back, that would be nice,” he told WPT.com after heads-up play against Alan Sternberg concluded.

Riess was all smiles following his first career World Poker Tour win. On Twitter, he displayed his usual aura of humbleness.

“Thanks for all of the love everyone! It will take me a little time to respond to everyone individually but I love you guys to death,” the gracious champion posted.

After Riess busted Terry Schumacher in 3rd place ($315,726), Sternberg had a slight chip lead moving into heads-up battle. But both players were deep-stacked and had more than 100 big blinds.

Riess quickly regained that lead and then slowly grinded his way to a sizeable advantage through the first 25 hands. The tables turned on the 38th hand, when Sternberg won a 4.5 million chip pot with two-pair, moving out in front once again, albeit not by a lot.

But after hand #72, Sternberg had built more than a two-to-one advantage. And yet, here’s the thing about momentum in poker: one card can flip it the other way.

Because then Riess caught his opponent bluffing in a hand soon after to retake the chip lead. The blinds forced Sternberg’s stack to deteriorate but then he battled back once more. In the end, however, on the 116th hand, the former WSOP champion won a decisive race to win the WPT SHRP Finale Main Event title.

World Poker Tour Season 15 is one tournament away from wrapping things up. That event, the $15,000 buy-in Tournament of Champions, gets underway today, Friday, in Hollywood, Florida.

Only current-season and past WPT winners are eligible to compete in this tournament. That includes Riess. Farid Yachou is the defending champion.

The tournament will last three days, with the final table taking place on Sunday. After a winner emerges, that’s all she wrote for Season 15.