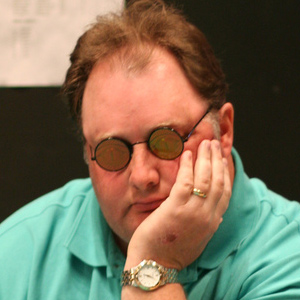 Former WSOP winner Greg “FossilMan” Raymer is giving poker fans a chance to invest in his career by selling shares of himself.

The winner of the 2004 World Series of Poker Main Event is celebrating the tenth anniversary of his big victory by offering shares of stock–of himself! Greg “FossilMan” Raymer, the Connecticut attorney and dinosaur fossil collector who earned $5 million when he won the ’04 Main Event in Las Vegas, announced last week that the public can now buy a piece of his tournament poker action.

Writing on the popular poker forum TwoPlusTwo.com, Raymer, 49, who now lives in North Carolina, announced: “I am accepting investments into a bankroll for all of my poker play in 2014. It has been 10 years since I won the Main Event and 21 years since I started playing poker. I still love the game and am looking forward to a great year in 2014 and I would like you to be a part of that.”

Raymer then went on to explain that since he is no longer employed by online poker room PokerStars as a paid flack, he needs money: “Since I no longer receive a guaranteed source of income, my wife has become more and more nervous about me playing poker. Although I have a 21-year track record of winning results in both tournaments and cash games, she is not a poker player and is worried that I will start losing. And without a paycheck to immediately recoup any losses, she gets anxious. So to make her happy, I have chosen to sell off a big piece of my bankroll, so that the downside risk is a lot more limited.”

Here’s how it will work, according to Raymer: “If we win, I get 40% of the profit as the player and the investors, including me, will split 60%. If we lose, all investors will lose equally according to the number of shares they purchased. I am looking to raise a total bankroll of at least $100,000 and shares will be sold at a price of $1,000 per unit. I will be buying at least 20 shares myself. Also, no expenses will be deducted from the bankroll.”

As most, if not all, multi-million-dollar-winning professional poker players are under constant scrutiny from the Internal Revenue Service, Raymer made sure to note in his posting that he won’t be playing it fast and loose with the IRS and neither should investors in Raymer Inc.: “If the profit is significant, I may require you to provide me with your social security number and other information for tax purposes. Any profit you make will be your responsibility with respect to taxes, as I will only be filing my share of the total profit to the IRS and state tax authorities. If they ask me why it was reported online that I won $200,000 but am claiming to have won less on my tax return, the situation will be explained and the proper information will be provided to these agents, i.e. names and information about the investors who shared in the profit.”

Raymer’s scheme is an interesting one, but nothing new. Several other poker pros sell shares in themselves, including three of the nine players at last year’s WSOP Main Event final table.