Justin Bonomo appreciates fast play, so it’s no wonder the 32-year-old pro bought in to the World Series of Poker’s $100,000 High Roller event this weekend. It marked the first time where players got to compete for a WSOP bracelet in a tournament using the big blind ante, a popular new format designed to speed up action on the felt. 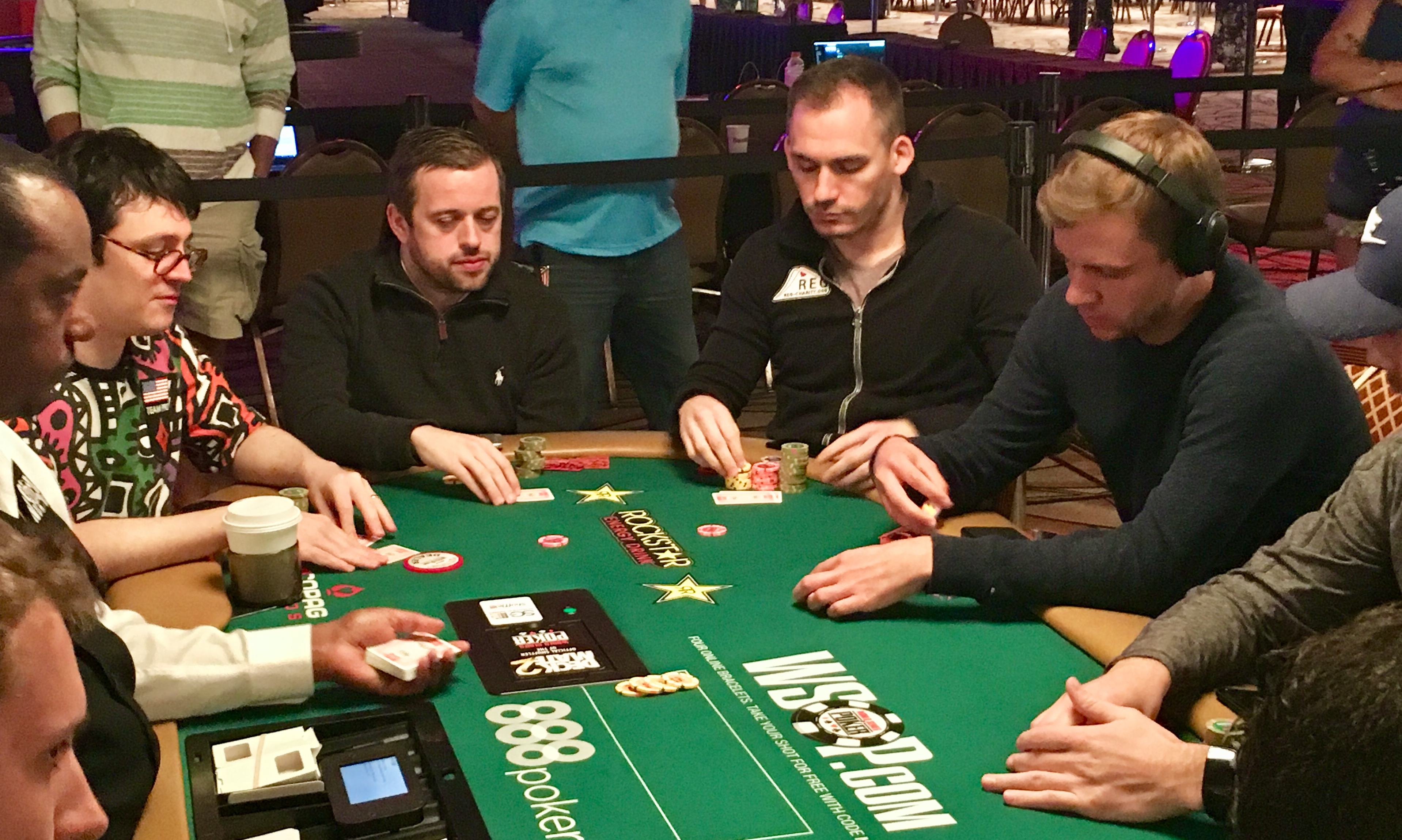 High stakes players in the $100,000 WSOP High Roller, including Justin Bonomo (seat 3), who won $5 million just a few days ago, seem generally pleased with the use of the big blind ante and a shot clock in select WSOP events. (Image: CardsChat)

“I have a lot of experience with it,” said Bonomo, who has more than $13 million in tournament earnings so far this year, many of those events featuring the trending ante structure. “It’s a lot better for sure. It speeds up the game.”

The High Roller marked the first of eight 2018 WSOP bracelet events that will implement a big blind ante. Instead of everyone at the table tossing chips into the pot before the start of a hand, the player in the big blind antes for the whole table.

Other events that will use the big blind ante method include a $50,000 High Roller no-limit hold’em tournament, the $1 million buy-in Big One for One Drop, and other NLH bracelet tourneys with buy-ins ranging from $1,000 to $10,000.

This first High Roller also features a 30-second shot clock, monitored on an iPad by each table’s dealer. The shot clock is another trend growing in popularity that the WSOP is trying for the first time in a bracelet event.

World Series of Poker Vice President and Tournament Director Jack Effel said he had high stakes players in mind when he and and his crew decided to change things up.

“From a high roller perspective, that market is very niche,” Effel told CardsChat. “It’s a different style of play. In these tournaments, you’ve got to play faster, you’ve got to make decisions faster. If you’re making decisions faster, and the game is being played faster, it is technically a little bit different of a strategy. The style of the play in the high rollers is definitely different than your standard formats.”

Event #5, the $100K High Roller, attracted household names and other feature pros such as Daniel Negreanu, Antonio Esfandiari, Fedor Holz, Jason Koon, Jason Mercier, Brian Rast, Erik Siedel, and Ryan Riess, along with student loan billionaire Cary Katz, two guys named David Peters, and an unknown (to us) player seated with a paperback edition of “The Myth of Poker Talent: Why Anyone Can Be a Great Poker Player” at his feet.

Effel pointed to a “huge interest” among those willing to shell out six or seven figures for a seat in a tournament.

“Of course you want to be able to offer them a competition at that level where they can play high stakes for millions of dollars and a gold bracelet and determine who the best player is in that format,” Effel said. “Poker is about being able to create a competition around the behavior and the environment and exactly how these games are being played around the world.”

The big blind ante has taken hold in smaller stakes, too, and is expected to be featured in lower buy-in tournaments throughout the summer.

“If antes would have originated from the big blind, nobody would have played anything else,” Effel said. But, he added, “I haven’t decided whether this is just another format in the categories of different varying formats that we have, or a if this is something that is good for the long-term greater good of the game.”

Moments before the first dinner break on Friday, Esfandiari waited as Holz contemplated calling The Magician’s all-in bet. In years past, the two might have been frozen in their seats for minutes that felt like aeons while Holz considered his decision.

But with the shot clock ticking and Holz’s decision not to opt for a time-bank card, Esfandiari scooped up the pot quickly.

“I love the shot clock,” Esfandiari said. “But I feel like now they just take 30 seconds every decision so it’s a bit tilting. But it’s definitely better than before, and it’s a bracelet event, so it’s great.”

He also enjoys the speed a big blind ante brings to the game.

“I’ve been saying they should do this for years,” Esfandiari said. “It works. I think it’s a no-brainer.”

Whether he has run into any strategy roadblocks at the end of tournaments with the big blind ante structure, Esfandiari said: “When I get there, I’ll let you know.”

Let’s hope things go well with these two initiatives they have the potential to speed up live games which has been a gripe of us online players. There some players that play 24 tables online and make decisions in instance but yet they tank like hell live every little decision. Annoys the *bleep* out of me when someone keeps tanking often or long.

I particularly appreciate a live match with a fast structure, the WSOP is to be congratulated for incorporating this fast game structure to the event, catching the attention of admirers as Justin Bonomo who is a winner in fast tournaments won a little more than $ 13 million. Congratulations to Justin for making lots of money, I hope I get enough wisdom to make lots of money playing poker. I hope one day to have the opportunity to play a WSOP live tournament. Good luck at the tables for poker lovers.