The "biggest" online poker event I've ever played in was the CardsChat 30 Day Course Freeroll back. What happened? It isn't fair to start at the start The real start was probably at least two weeks before the event. The course was designed to be taken in 30 Days or at someone's own pace (30 Days is probably a good pace). I found out of the CardsChat course later, but I wanted to learn, put the work in and study for it. I went through the lessons at my own pace of about 2 or 3 "lessons" a day and took literal notes, studied with other resources, and learned everything I could. Before this course, I basically just knew the rules (more or less, but knew them fairly well) and little else.

Anyhow, it took me a little more than one week to go through the content if I recall correctly and then I studied other poker content on the side leading up to the freeroll. As you could guess, this was my first poker event ever. I was hoping to do my best and use it as a learning experience.

So the freeroll began and about 5 or 6 hours later, I was the winner! Yes, it was almost surreal to win my first ever event, but I've been only learning more since then and I know I'm an even better player now

Ironically, my "biggest" poker event was my first - but I've played in several freerolls (with mixed, yet good results) since then with a few wins sprinkled here and there.


neptun1914 said:
Biggest as prize pool, number of players or what? If it is number of players i remember 2 or 3 years ago tournament at pokerstars with 100K guaranteed and one cent entry. There were more than 100 000 players inside as far as i remember and it was totally unplayable
If it is for prize pools i bet on the online WSOP or online EPT events this year.
Click to expand...

Yes, this would be my guess as well. For biggest in size, it would be a popular site with a low buy-in and for prize pools it would have to be a competitive field like WSOP or EPT.
C

So far, the biggest amount of people in one tournament for me was close to 1700. This has happened a few times. Many times I go for a little smaller, but I will play them for the experience. Many of the times people get to be massive maniacs, so they take themselves out quickly. Moneywise it was not much, but sheer numbers it was.

I think at this point GG Poker holds the record for the biggest online event with the $5k buyin WSOP Main Event.

Not sure if it was the biggest online prize, but it probably was.

In terms of most players ever it's probably one of pokerstars crazy record breaking tourneys, they're always doing cool stuff. :icon_sant

As mentioned previously, the largest prizepool is certainly from GG for last years WSOP Main event.

I'd assume the biggest buyin would have to sit at Pokerstars door though. Quite a few years ago they had a super high roller during WCOOP which was $102,000 to enter. Was fun watching that one play out. HU chop for just over 1million each and playing for around 50k extra between bencb and the young prince Fedor

I remember there was a world record tournament years ago on PokerStars with 300.000 people or so, with a very low buy-in like $1.

I dont think GGpoker has this kind of world record, but maybe they claim this in terms of prize pool at their site / client.

My biggest win in terms of field size was a 19k player HU automatic shootout allin freeroll, where I won 14 coin flips in a row
D

SecksyGambler said:
The largest ever prize pool for an online MTT was $27,559,500. it was achieved august of 2020 by GGPoker at the World Series of Poker Online Tournament with a $5,000 buy-in. The first place winner was StoyanMadanzhiev who took home a casual $3,904,686. (before taxes).
Click to expand...

Correct - technically the 'biggest' on line tourney to date.

In terms of numbers this year the PokerStars Platinum Madness Free Roll in February had 62, 557 entrants which I think makes it the biggest field this year. That was a blast, players exiting at a rate of over 1,000 a minute with several CC members making the money.
F

As for largest numbers of participants, as others have already said, its probably some event on PokerStars. Just a few days ago they had a 2 million guaranty 11$ event, which roughly translate to 200.000 entrys including reentrys. Thats fairly insane, and according to some posts here in CC forum it did not go down to smoothly.

fundiver199 said:
As for largest numbers of participants, as others have already said, its probably some event on PokerStars. Just a few days ago they had a 2 million guaranty 11$ event, which roughly translate to 200.000 entrys including reentrys. Thats fairly insane, and according to some posts here in CC forum it did not go down to smoothly.
Click to expand...

A lot of us got a free ticket to enter that game. I never stuck around to see the final number of entries after I got knocked out but it was over 200K at that stage and there was a fair bit of late registration to go as well as re entries.
D

fundiver199 said:
As for largest numbers of participants, as others have already said, its probably some event on PokerStars. Just a few days ago they had a 2 million guaranty 11$ event, which roughly translate to 200.000 entrys including reentrys. Thats fairly insane, and according to some posts here in CC forum it did not go down to smoothly.
Click to expand...

That's funny because as soon as I got my invite via the 'chest' (I presume we are all talking about the same series) I thought the entry so contrived I could not be bothered - therefore did not follow it at all.
P 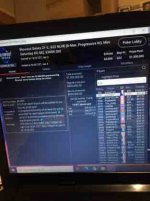 I played this one
J

Sunday Million 10M GTD, the other big ones Sunday Million 7M GTD as well and Big Blowouts 5M one yesterday and another one last sunday.

Two years ago, I won a $ 250 ticket. It was my most expensive tournament I ever played in. I do not remember how many participants there were, but still, I could not win anything.

If you mean the biggest buy-in is $ 82, and the tournament with the most players entered the Guinness Book of Records, I played on poker stars with over a hundred thousand players.
Share:
Facebook Twitter Reddit Link