Villian opens 2bb from MP, I 3bet 6b with JJ from MP2, villian shoves 25bb stack

Early/mid stage of the tournament. Is this a call? I think it's pretty borderline ... 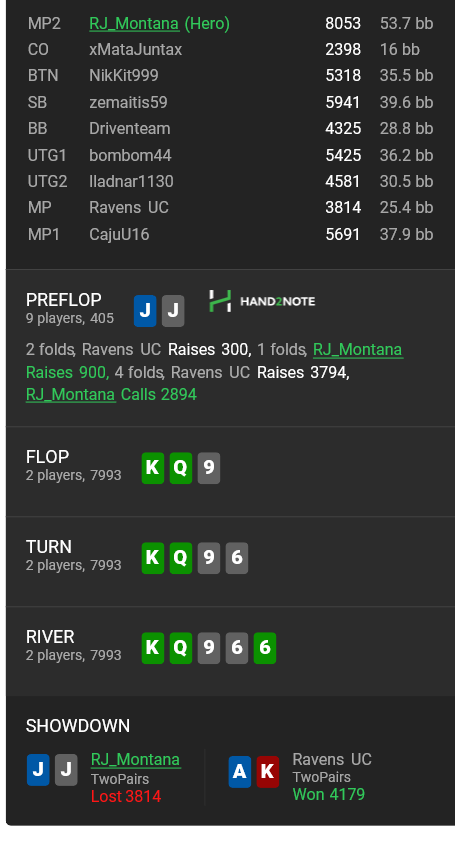 I think JJ is OK to go all-in preflop with that amount of chips, and If you only pay the mini raise, that pos-flop would have some bets too (straight draw), soo I think your stack size would decrease anyway.
fact - a high card (A,K,Q) hits the flop 52% of the time
F

It might be somewhat close, but I would find it really difficult to fold JJ here, especially since you have him well covered. So even if you lose, you are still left with a workable stack. If you have 150$ to spare, you can purchase ICMizer, which will give you the theoretical correct range for calling in spots like this, assuming that the opponent is playing perfect as well.

For me it was a good call, you have a good hand and you can defend it against this opponent since your stack is good enough to do it, that's why I think the call was good

The most important thing is that before you 3-bet your opponent, you need a plan in case he shoves. If you don't want to call it off, then it's better to flat with the JJ instead.

But calling here is almost certainly right because of odds. The pot is around 33bb and it costs you 19bb to call. Getting odds of fairly close to 2:1, if you win the hand anything near 40% of the time you're profiting nicely.

It's a great spot if he has AK and you're flipping getting these odds. So it could only be a fold if he's on a very tight 4-bet range of around: QQ+ and AK. (And even then it's fairly close!)

Thanks for responses everyone. I did not realize that I only needed 40% equity to make the call. Had I made this calculation I would have realized that JJ will have at least 40% equity even against a tight range of hands. Really shows the importance of math in these spots.

I ran this one through ICMIZER and it likes a call with as low as 88 here. I was finding this hard to accept but now I can see these mid-pocket pair hands will be at or close to 40% against the range. Now if I had a quick method of converting pot odds into the equity that I need to call then I would be ready to make better decisions.

Can anybody explain this calculation, or know of any software that is legal to use on pokerstars in realtime that can show this equity? Not to tell you to push or fold, just to calculate the equity needed to push?
Last edited: Dec 2, 2019

If we break this down to the bare bones JJ - in terms of preflop equity - only loses to QQ+ here. AKs is a little stronger than TT but doesn't quite overtake Jack's preflop. So, that being said, we are only losing to 3 hands...is your opponent only shoving 3 hands? Or would they shove AKs, AQs, TT, etc? Theoretically from an optimal strategy they should be shoving more than their stone cold nutted hands like AA or KK.

The second point I would like to make here is this is a 55c tournament. I play these alot, people shove a TON of hands they shouldnt be shoving like small suited Aces, pocket 66s and lower, so on and so forth. Sure we can still easily run into QQ+ here but there are just so many more hands we beat they will be shoving. Like I said - this is a 55c tournament - most of us should be well bankrolled for these stakes and as such shouldnt mind going bust when we make the correct play. No one likes losing, but poker is all about making the correct decisions and playing the odds for the long term. MTT tournaments are notoriously hard to navigated and we have to take some risk in order to run deep in these things - if we have pretty good odds to be on the good side of a flip we need to take that spot. If you only have like $8 or $10 in your roll that you are trying to run up - well that changes things and this buy in means alot more to your bankroll...for that situation I would advocate the fold because we have a very strong hand, but far from the nuts so we can preserve our tournament life by folding and look for better spots.

So all in all - JJ is too strong for us to be folding here in my opinion - especially if and when we have our opponent covered - then as long as we are properly rolled for this buy in level, we should be making this call alot because statistically we will be good here enough to justify the call.

GL in your games! Hope this helps

EDIT:: went back and noticed you posted the results of the hand - this was a good spot for you and you were about a 56% favorite or so to win the hand. This isnt a huge edge but definitely is one you shouldnt be passing up. You made the right decision in the moment and if you keep doing this over a larger sample you will see yourself winning this flip more than you are losing it. Nice job on the correct call!
Last edited: Dec 3, 2019
F

Jon Poker said:
The second point I would like to make here is this is a 55c tournament. I play these alot, people shove a TON of hands they shouldnt be shoving like small suited Aces, pocket 66s and lower, so on and so forth.
Click to expand...

In theory the limit should not matter to our decision making, but for a few different reasons I agree, that it does. First off, as you say, people will tend to gamble more in ultra low stakes like a 55c tournament. For this reason the risk, that an unknown opponent is only jamming QQ+, AK in a spot like this, is almost non existent. There is going to be some other stuff in his range, even though this time he did in fact have one of those hands.

Second we should also value our time, and if we play a 55c tournament, then the prices are so small, that it only matter to finish in top 3 or at least reach the final table. So this whole overly tactical thing, where we always consider ICM, and try to cash as often as possible, should pretty much be thrown out the window.

I dont even buy the argument, that someone might have a small bankroll. If we are talking money of this magnitude, a bankroll is just an artificial meaningless thing, since everyone should be able to deposit another 10$ is needed. Otherwise they can not afford to pay for food or housing either. This is a 55c tournament, and therefore it does not matter financially, if we bust. Period.

Therefore if we play these things, it should be pretty much pedal to the metal all the way through the tournament, or at least until the final table, and especially when its a turbo. We dont get many hands in a turbo, before the blinds catch up to our stack, so folding the fourth best starting hand in NLH before the flop is just not a thing in general.

Sure if its the first blind level, and there is crazy action ahead of us, whatever, fine. But when stacks get down to the more normal tournament situation of 40BB or less, we just get it in, and there is no need to even think about it.
F

By the way I had a pretty similar situation this weekend, when we were down to the last 4 out of 90 players in a 5$ MTT on 888 Poker. UTG opened, and I looked down on TT in SB. He was the effective stack with 25-30 BB, pretty much as in this hand. I 3-bet, he jammed, I snap called, and he flipped over A5 offsuit.

This just goes to show, that even when some actual money is at stake (difference between first and fourth place was 70$), people will 4-bet jam other hands that just the ultra nuts, and calling with hands like TT or JJ is pretty much mandatory. There might have been some dynamic in play, since I had 3-bet this particular guy two times before in the last few orbits, to which he had folded. But even so if his range include A5 offsuit, then calling off with TT and even more JJ is obviously printing money.

This time he won the hand, and I lost most of my chips to bust in fourth place a few hands later. But of course this does not matter. We were 4 players left with about equal stacks, and everyone was reasonably solid. In that situation you dont find better spots than getting it in with 70% equity, and if you lose, it just is, what it is.

Want to thank everyone again for the helpful responses. Reviewing hands and bouncing ideas around in this community is definitely stepping up my game.

For me it was a good decision, you have a good hand and you can defend it against this opponent, since your stack is good enough,so that, in general, JJ is too strong for us to withdraw here,we should make this call because we will be much statistical mind good enough here to justify the call.
Share:
Facebook Twitter Reddit Link