Which hand do you prefer to go all in pre flop with AK or JJ?

Both are good for me, when I'm at a 9 person table i prefer AK, but when I'm at 6 person or less table, then better JJ

depends on my stack, time in the tournament (and the type of tournament)
if i'm down, then any of those is good, to catch up
if it's the first few hands of the night and some people are playing crazy, i can easily fold either of these

Hello. according to my estack. if I'm too short I go all in with both hands. but for me JJ are the most losers and precisely against AK. so the best hand to go all in is AK.

Although it's called a coin flip, jacks are slight favourite. AK suited is better than unsuited.The bottom line is if you hold the jacks you can bet an ace will flop, or worse come on the river. And if you hold big slick, you will see rag, rag, rag...

Talk of the Devil. This was from tonight's freeroll. Pairs held up quite a bit here.

for me AK is better than JJ,.
N

It doesn't matter, usually the flip depends only on the site .. in reality I prefer to have JJ .. on pokerstars I avoid all in because it's another game
R

Minelli said:
Do you prefer an AK or JJ ? To go all-in preflop!!!
Click to expand...

Rather have a made hand!
I

I would always rather have JJ then AK, it's already made hand.

All-in Preflop of course I'd prefer the JJ - I have better equity with about 57% of the time I'm winning this "flip." Completely different question and answer if not All-in preflop and with deeper stacks though. Under those conditions, I think I'd lean towards AK. Note that JJ is ahead if shoved pre-flop, but under deeper stacked conditions, AK has many outs. JJ can realistically only improve by hitting another Jack and only two remain unaccounted for. AK can improve with any Ace or any King. AK has 16 total hand combinations possible, so AK also might be suited (12 off-suit combos and 4 suited combos). Conversely, JJ can never be suited without me suspecting a crooked deck! This means that AK might even have more outs to the Flush (or Straight for that matter).

JJ I prefer if short-stacked and All-in, but AK I might prefer if deeper stacked and more room to maneuver.
M

All in pre flop

I think pocket pairs are best to go all in with:icon_sant

It all depends on the state of the game, position, chip-stack and many other things should determine when you push all-in or call an all-in from other players, I have shoved all-in with many hands and won, even pocket Deuces.
At the end of the day any pocket pair is better than an A/K or A/Q etc, simply because you are holding a pair, and they are not, So in reality they have to hit the Flop, Turn or River to beat you, you don't.
If you can afford to lose 5 or 6 BBs when someone shoves all-in with A/K then any pocket pair is favorite in my book, and I will call even with Deuces, In a live game once I raised UTG with a pair of 8s and facing an all-in from the Button I counted my chips to see if I was calling, I had him covered by about three times as many chips, so I called.
The guy on the button smiled as he turned over Aces and I smiled back saying good luck and turned my 8s over, He thought I was being sarcastic and took offence by asking me if I was trying to be funny, and I said "far from it, I have a pair and you have a pair, Its a coin toss and anyone can win" I made trips and took him out of the game. That's Poker!
Just because you have the best hand Pre-flop, does not mean you will have the best hand on the River, It happens on-line as well as in Live games, But I was willing to risk a third of my stack to take out an aggressive player. and eventually win the tournament.

When the fun Stops, STOP!
R

In MTT push-fold stage, both hands are good for the all-in.
JJ is usually slightly ahead and rarely amplified; AK has a good chance of being amplified.

Well, JJ is a better starting hand but AK will have 3 times as many outs to take the lead post-flop, considering all outs are still in the deck. Even if one out hits then AK is in the lead. It's really a matter of being able to afford a hit if you lose no matter what your stack is. GL. :hello:

I would prefer JJ.
M

JJ is more possible than AK.
So I like JJ more than AK. 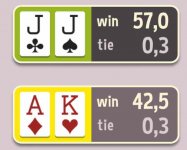 But that is If These hands Play against each other…

Question was “ do you prefer AK or JJ all in preflop

I will prefer JJ. In my opinion, a ready-made couple always has a better chance.

Minelli said:
Do you prefer an AK or JJ ? To go all-in preflop!!!
Click to expand...